1) This record and video were inspired by popular tunes of the 1920s. Looking over your lifetime, which decade produced more of your favorite songs? Being a Beatle girl, I'd have to say the 1960s.
2) "Cinderella Rockefella" topped the charts in England, yet barely broke into the Billboard Hot 100 here in the States. Still, the number was known to American audiences, performed as a duet on variety shows like The Smothers Brothers Comedy Hour (Tommy and Kate Smith), This Is Tom Jones (Cher and Tom) and The Dean Martin Show (Nancy Ames and Dean). Do you remember watching musical-comedy programs? Did you have a favorite? When I was a little girl, Andy Williams was my favorite. He wore sweaters, had blue eyes and was nice to everyone. I did NOT like Dean Martin. He smoked all the time, always wore a tie, and seemed creepy with the women. BTW, Andy can still make me sigh. "Soon I'll kiss you hello at our front door ..." Aw. I'm such a sap.

3) It was written by Mason Williams, a prolific composer and comedy writer, as well as a talented guitarist. He is best known for "Classical Gas," his 1968 instrumental. Do you enjoy instrumentals? Or does a piece of music need lyrics to become one of your favorites? All my favorite songs are songs. I like singing along.
4) This week's featured artists, Esther & Abi Ofarim, were considered the Sonny & Cher of Europe. A married couple, they had hits in the 1960s in both the UK and Germany and were depicted in magazines as the perfect young husband and wife. Fans were disappointed when, in 1969, they quit performing together and divorced in 1970 after 12 years of marriage. Can you think of a couple you knew in real life whose split shocked you? Or can you usually see it coming? I remember that back in my party girl days, our crowd included Holly and Mark. She was blonde, hale and hearty. He was slender, dark and soooo angry all the time. I was less surprised that they broke up than they were together at all. Unfortunately, after they split, we kept him and lost her. I ended up working with her a decade later and am happy to report that she married a man who treated her like a goddess. (Which she deserved. A genuinely sweet woman.)

5) Comparisons to Sonny & Cher are apt because, as with the Bonos, the wife's show business career fared better than the husband's, post-divorce. Esther's BBC specials were "appointment TV" in the UK during the 1970s. Today, with the advent of streaming and DVRs, viewers don't have to make sure they're in front of the screen when their favorite show airs. Tell us about the last show you watched. Was it live, streamed, on DVR or DVD/Blueray? Never Say Goodbye, a 50's tearjerker I found on YouTube. It's kind of dopey, but all the pretty people looked so pretty in Technicolor. 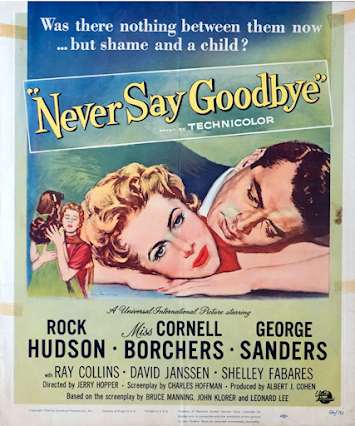 6) She had a solo hit with Esther in Kinderland, a collection of children's songs. Can you recall the lyrics of a favorite song from childhood?  Where did you learn it (home, church, Scouts ...)? Here's a round we sang in Girl Scouts: "Make new friends, but keep the old. One is silver and the other gold. A circle's round and has no end. That's how long I'll be your friend."
7) Abi continued performing after the split, but more often worked behind the scenes as a record producer and music publisher. Would you say you have a good head for business? Depends on how you define "business." I have become a savvy marketer. I am forever hopeless with finances.
8) After they finished school, both Abi and Esther served in the Israeli Army, and Abi saw combat. Have you served in our military? Did you ever consider enlisting? I appreciate everyone who does this, but no, I have never even been tempted to join the military. I have a little problem with authority and a big problem with my tongue. I think I would have spent  four years doing push ups.

9) Random question: How many keys are on your key ring, and do you know what each one is for? Four: Front/back door, my own apartment's deadbolt and cylinder locks, mailbox.