Thirteen popular podcasts. I first discovered podcasts during an Amtrak ride in 2018. I've listened intermittently since then. OK, I admit it: I'm a binger. I devour episode after episode until I'm satiated.

Here are 8 of the most popular, plus 5 I enjoy.

2. Call Her Daddy. Alex Cooper talks about sex and relationships from a feminist pov. This sounds like it might be the inspiration for Carrie's podcast in And Just Like That. 3 million listeners per episode.

4. The Daily. The New York Times' podcast. "This is how news should sound." 1.8 million listeners per episode.

5. Office Ladies. Angela Kinsey and Jenna Fischer, of the actresses from The Office, take a deep dive into each episode of the show. 1.5 million listeners per episode.

6. Pod Save America. Four men who worked in the Obama White House put the band back together for "a political podcast for people who aren't ready to give up or go insane." 1.4 million listeners per episode.

7. Stuff You Should Know. Josh and Chuck take on a single topic -- anything from nose breathing to The Stonewall Uprising -- and explain it. 1.2 million listeners per episode.

8. Morbid: A True Crime Podcast. Well, we certainly know what this will be about! Fans of this show are hooked at the mix of horror and comedy. 1.2 million listeners per episode.

9. The West Wing Weekly. I used to love this! Josh Malina, who played Will on The West Wing, and Hrishikesh Hirway, a composer and super fan, take one of my favorite shows apart episode by episode.

10. Zack to the Future. I recently admitted I'm a fan of the original Saved by the Bell. I have no idea why. But this podcast comforts me because I'm not alone. It's another episode-by-episode deep dive, with series star and podcast co-host Mark-Paul Gosselaar amusing me by admitting he doesn't have any idea why the show remains popular, either.

11. The History Chicks. Two good girlfriends, Beckett and Susan, discover herstory together, giving up high level overviews of everyone from Abigail Adams to Lizzie Bordon to The Statue of Liberty. It's been a great way to decide who you'd like to learn more about.

12. Freakonomics. I love this because you never know what you'll find here. From the reasons behind poverty in the world's richest country to Lance Armstrong's use of steroids, it's here. (Sounds like the original, but less popular, version of Stuff You Should Know, doesn't it?)

13. The Plot Thickens. TCM and Ben Mankiewicz take a serious, journalistic look at Hollywood. The latest series was devoted to Lucille Ball, and it was a wonderful companion to the Amazon Prime movie, Being the Ricardos.

Do you have any podcasts to add to this list?

Soon he will be gone! 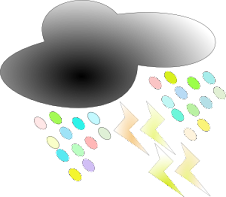 One of the biggest, blackest clouds on my horizon is named Alex. He is incredibly self-assured, and he shouldn't be. The total tonnage of what he doesn't know about my client and their business model could fill a freight car. Yet he was brought in to play executive creative director on a high-profile (yet low return) project.

He and I clashed from the moment we met. He thought I played "small ball," didn't reach for the big ideas. I think he's contemptuous of my client and their protocols. Obviously, we don't get along. I was sure that, when he was brought in full time, I would be axed.

I would have been at peace with that. After all, he's no one I want to work with. And a new executive creative director has a right to bring in his own team. Plus I've been working since I was 17 and have never been singled out and let go. Ever. So maybe it's just my turn.

I've been upset about it, though, because I simply cannot afford it right now. I am looking at a lot of dental work, and my retirement funds have taken quite a hit this year (as have everyone else's). Alex showed up to wreak havoc just when I could least afford it.

Well, I found out yesterday that Alex will not be my boss after all. He has accepted a full-time position with another agency and, as of April 29, will be out of my hair. Considering that Friday I have a day off (oral surgery) and then vacation the following week, I may never even see him again.

That is good news. It's as though the sun has come out again.