Reading The Help has been fascinating for me because I grew up in The Land of Lincoln. It's not that there isn't/wasn't racism up here -- I'm not that naive. It's just it wasn't institutionalized and accepted here the way it was in the South.* The adults in my neighborhood gave lip service to racism being "bad" and lowered their voices when talking about "them."

Since the book is set in Jackson in the early 1960s, I knew that the assassination of NAACP officer/civil rights leader Medgar Evers would have to be addressed. It would be like telling a story about Chicago in February 1929 and not mentioning the St. Valentine's Day Massacre. Some events define a town and a time. So I anticipated an accounting of the impact the Evers assassination had on the citizens of Jackson. According to author Stockett, life went on in the homes of Jackson's white citizens, regardless of the suppressed heartache and rage felt by the "colored help."

So I did what I do. I went all geeky and looked into the further. I was shocked to see how controversial it was for President Kennedy to allow Medgar Evers to be buried at Arlington Cemetery, with full military honors.

The JFK Library has preserved the telegrams sent to the White House after the announcement. It's shocking to me that people were not embarrassed to bother the President of the United States with their ignorance, that they weren't ashamed to include their full names and addresses!

I protest this national disgrace and insult to the heroe buried in Arlington National Cemetery to have the body of Medgar Evers interred therein. This honor should be bestowed only on the deserving and not upon political rabble rousers. Cannot the President and the Congress stop this insult to our national heritage? T. Earl Taylor, DDS, Columbus, GA

It goes on and on.

Also in the file is this telegram, written by Evers to the President early in the same month he died, descri 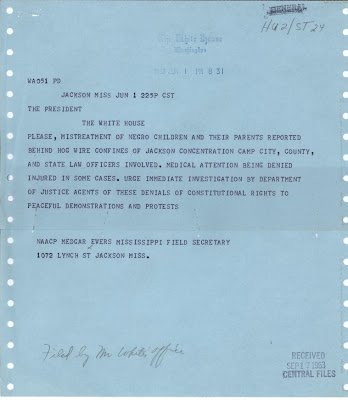 bing first-hand and in real-time what Skeeter's Jackson was like.

President Kennedy stood by his decision to allow Medgar Evers' burial in Arlington. And four months later he joined him there.

When I think of JBKO and The Beatles and Twiggy, it's easy to romanticize and glamorize the 60s. It was also a hateful, violent time. Riots, assassinations. It's important to remember so that it never happens here again. Sometimes, listening to the birther crap, I get a horrible feeling of deja bloodlust.

* While working on Bill Clinton's national campaigns, I remember being told that this outward, perhaps superficial, civility makes it harder to have an honest conversation about race, the way the Arkansas natives were used to. I don't know, because this is the only place I've ever lived. But it's an interesting topic, isn't it?
Posted by The Gal Herself at 4/23/2011 04:50:00 PM 1 comment:

What's wrong with me?

All I want to do is sleep. Or nap. Or be lazy. It's our first gloriously sunny day in what seems like forever, and I can hear kids playing outside my window, but I can't make myself move from this spot.

Thursday I spoke to my shrink about this, and HRT. She agrees that it's time to look at the role my meds are playing in my menopausal weight gain and complete lack of energy, because something is out of whack. Next stop: my gynecologist. I'll call for an appointment on Monday. While I'll probably have to wait to get in for my annual checkup, I'm lucky in that he'll listen to me. All three of my doctors -- shrink, gyne and GP -- have been very sympathetic and compassionate. I've heard the horror stories about patients who feel herded in an out of their doctors' offices. I'm fortunate to not be one of those patients.
Posted by The Gal Herself at 4/23/2011 04:15:00 PM 1 comment:

I don't even drive & I remember this commercial is for Highlander