1. Best movie you saw during the last year. Elvis by Baz Luhrman. I went in with low expectations because I'm not fan of Baz, but he hit it out of the park. It's affectionate without devolving into hagiography and it gives the King his due. (Tom Hanks is more than a little over the top, though.) It's streaming now.

2. The most underrated movie. Holiday (1938). Cary Grant and the Great Kate Hepburn.

3. Favorite love story in a movie. So many! I'll go with Butch Cassidy and the Sundance Kid. No, I am not implying there is anything sexual between them. But the penultimate scene, where a dying Butch and Sundance crack wise and pretend they have a future to give each other hope, is terribly moving. Friends can love, too, you know. 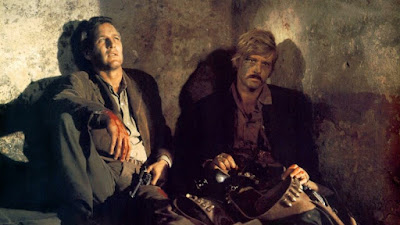 4. The most surprising plot twist or ending. The Sixth Sense. (I really didn't know.)

5. A movie that makes you really happy. It's a Wonderful Life

6. A movie that makes you sad. Old Yeller. I will never watch it again, and you can't make me.

7. Favorite made for TV movie. Maybe it's a Chicago thing, or a 70s thing, but the story of Brian Piccolo and Gale Sayers had a tremendous impact on me when I was a kid. I like thinking that in Heaven, James Caan got to meet Brian Piccolo.

9. A movie with the best soundtrack. A Hard Day's Night. I mean, The Beatles! C'mon!

10. Favorite classic movie. Gone with the Wind. Yeah, it is in TCM's Ben Mankiewicz' favorite term, "problematic." But that doesn't stop me from loving it.

11. A movie that you hate. The Wolf of Wall Street.

12. A movie that changed your opinion about something. Casablanca. Sometimes the  bravest, most noble thing you can do is say good bye.

13. A character you can relate to the most. Jane Craig in Broadcast News.

14. A movie that is a guilty pleasure. Valley of the Dolls. I love every wretched frame.

15. Favorite movie based on a book/comic. To Kill a Mockingbird. Great movie, great book.

16. A movie that disappointed you the most. Anything with Garbo. I just don't see what all the enduring fuss is about.

17. A movie from your favorite actor/actress. The Way We Were. Streisand and Redford are both my favorites.

18. Favorite movie from your favorite director. George Cukor directed more than 60 movies, including my favorite, Holiday (1938).

20. A movie you wish more people would have seen. A Face in the Crowd (1957). Andy Griffith is extraordinary in this dramatic role. He plays ... Glenn Beck, Rush Limbaugh, Tucker  Carlson, insert media demagogue name here. Bad Andy is a revelation, and every American adult should see this.

21. Favorite documentary Get Back.

22. Favorite animation Oh, I don't know. I do love watching Dick Van Dyke with the penguins in Mary Poppins.

24. A movie that you wish you had seen in theater. Psycho. I have seen it in a theater and it's beautifully made, better than a slasher horror film needs to be. But I wish I'd seen it the first time in a theater.

25. Your favorite movie of all time. I suppose I have three -- The Way We Were, Holiday, and Gone with the Wind.