President Donald Trump has never hidden his misogyny. Remember when Megyn Kelly asked him why he publicly dismissed women as “fat pigs, dogs, slobs, and disgusting animals?" He complained that her question -- not his behavior -- wasn't appropriate, not from a woman who had "blood coming out of her eyes and blood coming out of her wherever."* He was not yet President. Somehow, as a nation, we decided that this attitude was acceptable in our Commander in Chief.

It's no surprise that his supporters have been emboldened. After all, if Donald Trump, holding those views, could run for the highest office in the land and win, why shouldn't they say what they're thinking? Women in power are uppity emasculating bitches. They deserve to be brought down a peg, and in the most vulgar way possible. 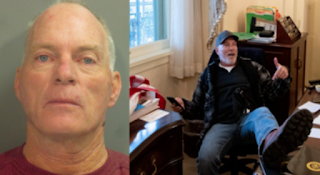 So I don't know why it wounded me so to see this man, Richard Barnett, bragging about how he violated a successful woman's space. During the Capitol riot, he broke into Nancy Pelosi's office and, he told us, sat at her desk and proudly "scratched his balls." Then he left her a "nasty note," in which he referred to her as "Nancy, you bitch." He left a quarter on her desk, "even though she ain't fucking worth it."

Richard Barnett is one of those Donald Trump referred to as "very special" and said, "We love you."

I would not have recognized him in his mug shot. Apparently, being in FBI custody is something of a buzz kill.

*I heard that live. I was scrolling through my DVR, deleting things, with Don Lemon's CNN show on in the background. I thought, "Did I just hear that? Did he just say that?"