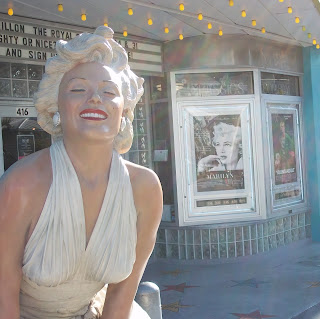 Last week I saw My Week with Marilyn at the beautiful Tropic Cinema and thought Michelle Williams was very moving as the movie icon. But she's just one of many to take on the role of Marilyn Monroe.

1) Michelle Williams is certain to get an Oscar nomination, and perhaps an Oscar for My Week with Marilyn. (2011) How ironic that Williams will get the respect from Hollywood for playing Marilyn that the real woman longed for.

2) Ashley Judd was very good as Norma Jean in Norma Jean and Marilyn, while ...

3) Mira Sorvino played the same woman as Marilyn in 1996's Norma Jean and Marilyn. Each lady was nominated for both an Emmy and a Golden Globe for playing both periods of her life.

4) Catherine Hicks (yup, the mom from Seventh Heaven) won an Emmy nomination for doing an outstanding job in Marilyn: the Untold Story, while ....

5) Tracy Gold (yup, the sister from Growing Pains) played her as young Norma Jean in the same 1980 made-for-TV movie.

6) Poppy Montgomery of Without a Trace and now Unforgettable played Marilyn in Blonde (2001). Wish I'd seen this, for I think Montgomery is an underrated actress and I like the idea of Ann-Margret as Marilyn's grandma.

9) Sophie Monk was Marilyn in The Mystery of Natalie Wood, a 2004 biopic about Ms. Wood's death.

10) Marika Taylor plays Marilyn in a docudrama called The Death of Marilyn Monroe (2002).

13) Heather Thomas of The Fall Guy played Marilyn in Hoover vs. The Kennedys (1987).

As with Jackie Kennedy in last week's TT, I find no actress as compelling playing Marilyn as the real Marilyn. The Prince and the Showgirl was kind of a suck movie, but Marilyn was luminescent, even in that ...

I looooove reading about old movies, and was happy to find this blog, The Girl with the White Parasol. I am also happy to find a good meme to steal. If you play along, let me (and The Girl) know. 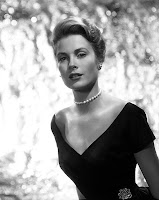 1. What is your all-time favorite Grace Kelly costume? The elegant LBD she wears to the cast party at the very end of The Country Girl. She finally gets to go all glam after wearing those off-the-rack outfits.

3. Name your favorite femme fatale. Martha in Who's Afraid of Virginia Woolf (1966). Though if she were here, I'm not sure she'd accept the title, saying, "I'm loud and I'm vulgar, and I wear the pants in the house because somebody's got to, but I am not a monster."

4. Name the best movie with the word "heaven" in its title. Heaven Knows, Mr. Allison (1957). Deborah Kerr is great as a nun who tries to reform and comfort soldier Robert Mitchum.

5. Describe the worst performance by a child actor that you’ve ever seen (since Laura gave me the idea). Cammie King as Bonnie Blue Butler in GWTW. Didn't even have to give this one a moment's thought.

7. What is the one Western that you would recommend to anybody? Shenandoah (1965). Jimmy Stewart is a patriarch trying to keep his family out of the Civil War. The movie is kinda soapy, but Stewart is sublime.

9. Has a film ever made you want to change your life? If so, what was the film? It's from the 1970s, so I don't know if it qualifies chronologically as classic, but The Way We Were. I often (still) find myself tamping down the truest part of my personality to fit in, and I (still) always hate myself for doing it. I believe this is the 21st time I've mentioned that movie in this blog ... 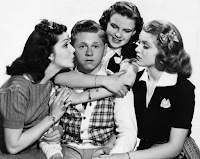 I want those Christmas decorations to magically take themselves down. I managed to un-holiday my office last night before I went home, but my home is still all covered in cards and evergreens. And then there's taking down the tree and putting the ornaments away! Ugh!
Posted by The Gal Herself at 1/04/2012 10:28:00 AM 3 comments: