From one daughter to another, "Atta, Girl!" 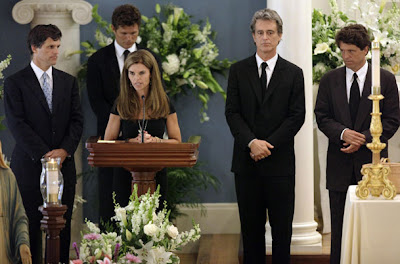 Maria Shriver's eulogy of her mother, delivered with Eunice's coffin before her and her brothers behind her, made me mist up a little. And I don't mist easily. But this was well written and universal, and like Maria I'm almost 52 and facing the fact of my own mother's mortality.


Here are excerpts, courtesy of boston.com:


Over the past few days, our mother has been called everything from a saint, to a pioneer, to a trailblazer, to a true original, to a civil rights advocate of legendary proportions, to a force of human nature who more than held her own in a family of highly competitive, high-achieving men. She was indeed a transformative figure.

Mummy was our hero. She was scary smart and not afraid to show it. She was tough, but also compassionate. Driven, but also really fun and funny. Competitive, but also empathetic. Restless and patient. Curious and prayerful.

She liked to hang with the guys, but all her heroes -- except for her brother Jack -- were women.

… She had five kids who adored her and loved to be with her, and you have the ultimate role model. Mummy was all of our best friends, and it was an honor for all of us to be her children, and a special privilege for me to be her daughter.

Now that's not to say it was always easy being her kid, because she wasn't exactly like any other mother you'd ever seen. As a young girl, I didn't actually know how to process her appearance much at the time, because most of the mothers were dressed up and neatly coiffed. Mummy wore men's pants, she smoked Cuban cigars, and she played tackle football.

She would come to pick us all up at school in her blue Lincoln convertible, her hair would be flying in the wind, there usually would be some pencils or pens in it. The car would be filled with all these boys and their friends and their animals. She'd have on a cashmere sweater with little notes pinned to it to remind her of what she needed to do when she got home. And more often than not, the sweater would be covering a bathing suit, so she could lose no time jumping into the pool to beat us all in a water polo game. Needless to say, when the nuns would announce her arrival, I would try to run for cover.

Mummy, when she wasn't trying to beat each of us in a game of tennis or on the football field, you could usually find her at Mass with our father, praying or working. And I mean really working. She was, as you all know, determined to change the world for people with intellectual disabilities, and she did, and you had no choice but to join her in her mission, which took all of us from our backyard to every state in this nation and just as many countries around the world. Our mother never rested, she never stopped; she was momentum on wheels. She was focused, relentless, and she got the job done.

Today when I close my mind, and I'm sure this goes for my brothers as well and we think about our mother, we see her clapping her hands and cheering us all on in everything we did. I see her encouraging me to beat my brothers in tennis. I see her moving my books from the back of the bookstore to the front of the bookstore, and when the manager would call and tell her she couldn't do that, she'd tell him to go right back behind the desk where he belonged and be quiet. I hear her when I would call her on the phone.

Mummy was indeed a trailblazer. She showed up in her life as herself, and that takes courage. She took adversity and turned it into advantage. Inspired by the rejection she saw many women face, especially her sister Rosemary and her mother, and other mothers of special children, she turned that into her life's focus and her life's passion and mission. Her own brand of what I'd call maternal feminism. She believed 100 percent in the power and the gifts of women to change the language, the tempo, and the character of this world. Her heroes were the Virgin Mary, Mother Teresa, Dorothy Day, her own mother, her sister Rosemary. All of whom in her eyes had already done that, and she would always challenge each of us to do the same. You will, she said, you must, you can.

If she were here today and speaking here -- and I think we all wish she were -- she would pound this podium, she would quote Teilhard de Chardin, and ask each of you what you have done today to better the world. She would tell you stories about her special friends and what they have accomplished, and she would ask each and every one of you to join her in making this world a more tolerant, just, and compassionate place. She would end by talking about her own family, how grateful she was to her parents and to her brothers and sisters, all of whom she absolutely adored. She'd tell you how proud she was of Sargent, and then she'd tell you how proud she was of each of us.

And she would tell you about each thing each of us did, and she'd ask you for money, for all four of our brothers who run non-profits they'll probably ask you later, but she would ask you. So on behalf of them -- [pointing to each of her brothers] Save the Children, Bread, Best Buddies, Special Olympics -- and then she would remind all of you that you hadn�t done enough and there was much more to do, and you would leave this church simply in awe of her.

Mummy was indeed a towering figure. I'm sure everybody in this church has a story about her, a story that would make you laugh, make you cry, a story that would make you roll your eyes at her audacity and her brilliance. She was the real deal, a woman who did everything women aspired to. She had a great husband, she had a great family, a deep, deep faith in God, and she combined that with being a fearless warrior for the voiceless. I am so thrilled, as I know my brothers are, that people all over the world are hearing about her this week, in editorials and on television, because they need to hear stories about individuals like Mummy.

She let all the different parts of her go out, and that's what made her unique. She didn't allow herself to be tamed, or contained. She achieved herself, her true authentic self. The very same woman who made grown men quake in their boots when she stepped foot on Capitol Hill was the very same woman who spent quality time with each and every one of us, making us feel loved, making us believe in our self. She spent quality time with each of those grandchildren you saw here on this altar, building sandcastles, looking for leprechauns, looking for mermaids. She didn't choose between being strong and soft, complex or simple.

As her story goes out this week, I believe that she will become a new torchbearer for women of our time, sending a new message. That you don't have to be a certain way, you don't have to fit a stereotype, that over your life you can have a full, complete, spiritual life -- a life that is about others and a life that is about family. Her story, I believe, teaches that women are complex and they can live out every simple, single aspect of that complexity.

Over the years, all of us learned so much from her, by listening to her, by watching her, and this past year, I learned from her as well. As she softened, she gave me permission to do the same. As she sat still, she taught me how important that is in one's life. She taught us that real strength can also be found in real vulnerability, and that it's OK -- even important -- to lean on those who love you.

To be honest, I think it's impossible for each of us to think about our life without Mummy. It's interesting, as we've talked amongst us the last couple of days, each of us felt like an only child. Each of us felt as though our mother was our best friend. Each of us talked to her every day, and sometimes more than once. And of course, I think if I said to my mother, which I often did, "I can't go on without you, I don't know how to live without you," she'd say, "You're fine, I've raised you well, now get out there, I don't want to hear one more yip, get going, your brothers will be nice to you."

And so I will, we all will, get up and get going.

Friday. 17 freaking runs! Today the Cubs ended their losing streak in the most explosive way, beating the Pirates 17-2. D Lee got 7 RBIs, and he didn't even finish the game! Before the game, Lou Piniella warned us not to write off this season as "doom and gloom." Sweet Lou clearly knows what he's talking about. That makes me happy.
Posted by The Gal Herself at 8/14/2009 07:50:00 PM 2 comments:

Aw, I love this movie. 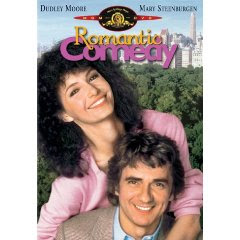 Mary Steenburgen plays Phoebe, a sweet, rumpled, diffident writer wanna-be who is teamed with Jason, a celebrated, sophisticated and egocentric playwright who has suddenly lost his touch when it comes to hitmaking. Played by Dudley Moore he is a bit of a pill, but that doesn't bother me because I suspect that successful and gifted playwrights probably are more than a little difficult to get along with.

Jason's agent hopes that having a writing partner will give his career a jumpstart, and it works. Phoebe and Jason go from being unlikely writing partners to close friends to a kind of heterosexual Will and Grace -- more than friends but less than lovers. As months turn to years, everyone can see they're in love but them. (Shades of Olivia and Elliott on SVU.) Unfortunately they never seem to be single at the same time. It's never illicit; one very sweet scene shows Jason's wife affectionately rubbing a sleepy Phoebe's feet because she fears her husband's other partner is cold. It's about fate and timing and romance and longing and I like it. If it happens to turn up on a cable channel near you some night, give it a try.
Posted by The Gal Herself at 8/14/2009 07:16:00 PM 2 comments:

Things I hope to accomplish today!

My office closes at noon on Fridays in summer. Since I have given my "writer's roughs" to my art director and she needs more than just a few hours to work her magic -- and since I think she's lazy and she thinks I'm over the top "Type A" and we can't stand the sight of each other any more -- I have taken this morning off. Giving me a (drumroll, please) THREE DAY WEEKEND!

Here is what I wish to accomplish today:

• Laundry (don't laugh at my undies!)
• Grocery shopping
• Visit to the post office
• Pay bills
• A coffee shop lunch or brunch with my book (For the Thrill of It -- fascinating!)