Good for you, Mom!

Took the bus to the mall today. They were running behind schedule and the one I boarded was pretty full to begin with and got more crowded as we continued our journey. A woman with two sons got on after me and took the "priority seats" at the front. She and her boys -- one about 10, the other a teenager easily a head taller than his mom -- were all fit. The priority seats were just the only ones still available.

When an elderly woman boarded at the next stop, and the older boy didn't relinquish his seat, Mom shot him a look fraught with meaning. He rose instantly.
Posted by The Gal Herself at 10/22/2011 08:46:00 PM 2 comments: 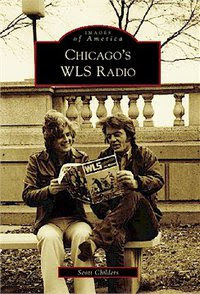 Saturday 9: The Last DJ
1. Who was favorite DJ and what radio station did you listen to as a kid? My charming and delightful OLD UNCLE LAR (Larry Lujack) at the Big 89, WLS. He's shown here with his sidekick, Little Snotnose Tommy ("Hello, Tommy.") It's scary how many catchphrases I remember, even after all these years.
2. What has been the weirdest thing you have worn in public? Everything I wore between 1971 and 1990 appears weird to me now.
3. What was the best part of last weekend? Playing Scrabble with my nephew. Sorry that answer is so dull. I'm still recovering from surgery and prefer naps to most other activities.
4. What was the most effective punishment for you as a kid? None of them were that effective. As a matter of fact, I believe I may still be grounded, stemming from an incident in the mid-1970s.
5. Would you lie to your significant other to not hurt their feelings? Of course. Just as I would not expect an honest answer to "Do these pants make my ass look big?"
6. We're taking you order for breakfast. What would you like? Steak and eggs and oj.
7. Do you celebrate Halloween? If yes, do tell. If no, why not? I don't celebrate it. Sorry.
8. Do you hand out candy to the neighborhood kids? I usually am not home in time. But if I'm around, of course.
9. What's the favorite age you've been, so far? 35. I felt strong and smart and sexy.
Posted by The Gal Herself at 10/22/2011 09:13:00 AM 3 comments:

I have a cousin who lives in a nearby suburb. Because he's about 10 years my junior, and due to family fractures too complex to go into here -- they give me a headache -- but have little or nothing to do with him and me, we never saw each other very often. What we have in common, frankly, is our acknowledged "favorite" status. I always knew I was our grandpa's favorite, and he was our grandma's shining star. Now that our grandparents are gone, there's something very dear about connecting and remembering.

We have exchanged updates often on Facebook but haven't seen one another since April. I know he was aware of my recent health problems and was aware I had his support, but I was tickled to receive a package from him yesterday. 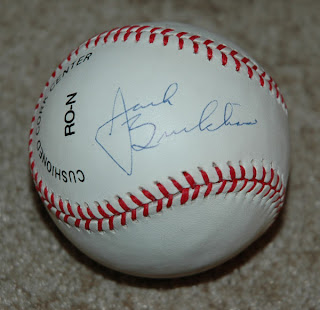 A baseball signed by Jack Brickhouse! The Cubs announcer of my youth. Nouveau fans think of Harry Caray as "the voice of the Cubbies," but real fans KNOW it's the man who called Ernie Banks' 500th homer. Mr. Brickhouse died in 1998.

My cousin, noting the "rough patch" I've suffered lately, bought this ball for me from a neighbor, who had purchased it years ago in a Wrigley Field giftshop. It was a lovely gesture.

When you think of my family, you think Cubs. It's the one thing we have shared, generation to generation. And my cousin reports he recently recovered my grandmother's prized possession, a baseball signed by her beloved Ryne Sandberg. He thought the ball had been lost forever but found it in the attic, nestled among the insulation!

I received MY Jack Brickhouse ball, and he found GRANDMA's Ryne Sandberg ball, on the very day that Theo Epstein signed with Cubs! Coincidence? I think not!