Time with the family

One of the good things to come from this medical adventure is feeling reconnected with the important people in my life. First and foremost, my mom.

She sat with me in the waiting area before surgery and stayed, along with my oldest niece (in from California) until my doctor came out with the "benign" pronouncement. Then she visited me in t 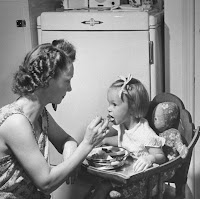 he hospital on Sunday and came along with my friend Kathleen to pick me up on Monday. She brought orange juice and chocolate pudding.

She stayed here with me until Wednesday night -- taking my temperature, monitoring my meds, listening at the door when I took my showers, setting up my humidifier, doing a load of wash and ensuring that I could make the walk around the block to the doctor's office. Last night, when she was satisfied that I was doing as well as a person can less than a week after major surgery, she packed up and went home.

The best thing about having her here was not being babied -- though I do like knowing I have chocolate pudding cups in the kitchen. It was spending time with her. Together we watched the ABC special about the Jacqueline Kennedy tapes and Dr. Phil's interviews with Casey Anthony's parents. I enjoyed watching her dote on my cats. As she kept an eagle eye on my health, I tweaked her about hers. We hugged a lot. It was lovely.

Then there was my favorite niece. She's only in town for a week before leaving for college in Michigan. Weeks ago, before I went into the hospital, she promised me she would see me before she went away to school. I knew she would. She came by last night to bring me a get well present and to take my mom home. But it took her an hour to arrive, and when she did, her face was swollen and red with tears of humiliation and frustration.

Her parents got a new car, a van, and she just began driving it. She unwisely tried to squeeze it into one of the small spaces in my building garage and found herself stuck. After trying over and over to maneuver it out of the garage without hitting a pole or another car, she gave in and called her dad. He came out in his truck, parked it on the street, went in and navigated the van to safety.

We all praised her for being smart enough to ask for help, for not proudly and immaturely risking damage to herself or the new van. Still, she was drenched in embarrassment. She is so excited about her status as a burgeoning independent woman and she had to call her daddy for help! I'm reminded anew of how young she still is, and how lucky we are that my brother-in-law is such a wise and loving dad. 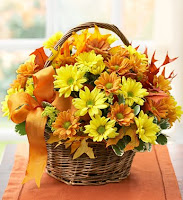 And my oldest friend. She's been checking on me regularly, calling often, even persuading them to give me the phone while I was still in the recovery room after surgery. I have no recollection of this, of course, but she reports to me that I complained of being thirsty and told her she was really my sister. It was she who first told me my cyst and endometrial lining were benign. And I suspect she was the one really behind the basket of autumn flowers sent to my hospital room by "Sir Paul."

Is it any wonder that I am heartened by all the good that has come from this rather awful experience? I must remember to celebrate with the "thankful heart" the hospital chaplain and I discussed.
Posted by The Gal Herself at 9/15/2011 05:48:00 PM 3 comments: 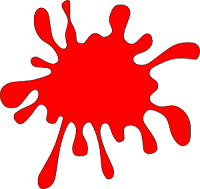 Yesterday, a few hours after leaving the doctor, I discovered a few drops of blood on my panties and my nightshirt. This morning when I changed the bandage, I found them again. It's at the very top and the very bottom of the incision. I'm going to continue keeping it clean and covered and, if it continues through the weekend, I'll call the doctor.

Oh yeah! The rash on my tummy my doctor knows about is still there, too. Yes, if Monday isn't a clearer day in The Land of the Incision, I'm definitely calling the doctor.
Posted by The Gal Herself at 9/15/2011 05:22:00 PM 2 comments:

This was an important day post-op.

• Visited with my doctor and had a belly-full of staples removed. There was very little blood and no pain at all while he was doing it, and he pronounced my incision area as looking very good. (I pronounce it as looking a little yellowy-green and angry, but then, I'm no MD.) My cyst weighed just under 5 lbs. FIVE POUNDS! No wonder I always felt so bloated and fat!

• Bought a lottery ticket and a bottle of milk.

• Stopped at Subway and had my first potato chips in a week. It felt good to crunch again.