1) In this video, Jon Bon Jovi recalls decorating the tree with Cindy Crawford. They took turns wearing a Santa hat. Will anyone in your household be donning a Santa hat this season? Not a Santa hat. But in years gone by, my friend Henry has cheerfully worn the hat with elf ears I gave him. 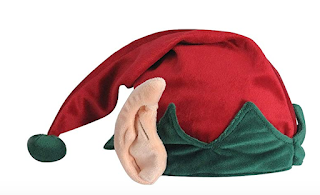 2) He sings of the salutations he's received from friends and relatives. Have you received many holiday cards this year? Eleven (thirteen if I count the thank you holiday cards I got from Toys for Tots and the local PBS station.)
3) Will you wrap many presents? Or do you prefer to use gift bags? I wrap when I can. I'm very cheap that way.
4) Jon Bon Jovi says he and Frank Sinatra are distant relatives. Do you believe that musicality is a genetic gift, or that it can be taught? I am, regretfully, tone deaf, so I believe it's a genetic gift. I doubt even the most talented teacher could do anything with me, musically.
5) Jon is such a big Star Wars fan that he wrote a carol called "R2-D2: We Wish You a Merry Christmas." There a dozen Star Wars movies. How many have you seen? Just the first. My review: too boring to watch, too loud to sleep through. And yes, I know the rest of the world disagrees with me.

6) Jon once guest-starred as Carrie's love interest in an episode of Sex and the City, the popular HBO sitcom set in New York. The new reboot, And Just Like That, also centers around NYC life. Where does your favorite TV show take place? Right now, I'm loving the old Dick Van Dyke Show, which alternately takes place in Manhattan and New Rochelle.

7) Jon met his wife, Dorothea, when they were still in high school. Do you remember who you wanted to marry when you were in high school? Oh, yes! His name was Walt. He was 6'5, warmed the bench for the basketball team and had shiny black hair that always fell in his eyes. I found him devastatingly attractive! Last I heard, he was a paint/wallpaper contractor in a nearby suburb.

8) At Christmastime 1992, when this song was released, toys that tied into Disney's Little Mermaid were very popular. Have you purchased toys for anyone on your gift list this year? No one I know personally. But I got earrings, Hot Wheels and a Star Wars sticker book for the children who will be spending Christmas with their moms at the local women's shelter. Then there's the jewelry-making kit I was persuaded by my favorite-most ball player, Anthony Rizzo, to contribute to a pediatric cancer patient at Lurie Children's Hospital. I love buying toys! It's such a happy thing. 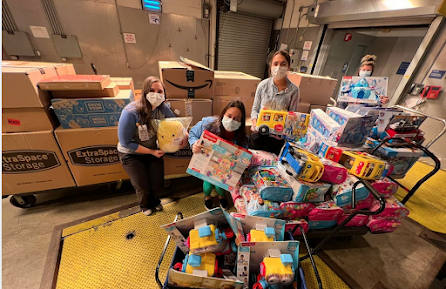 Here are gifts arriving for the Anthony Rizzo Family Foundation Amazon Toy Drive for Lurie Childrens Hospital. For every toy we bought, Anthony bought one, too. He's such a good boy and I miss my favorite (former) Cub sooooooo much!


9) Jon recorded "Please Come Home for Christmas" to benefit The Special Olympics. Here's your chance to plug a cause or organization that's near and dear to you. Since I've raved about it already, let's go with The Anthony Rizzo Family Foundation. More than half of the families battling pediatric cancer will file for bankruptcy. This organization, begun by All Star first baseman and cancer survivor Anthony Rizzo, provides much-needed financial assistance. Everything from parking at the hospital (yes, many hospitals charge $20/day or more for parking!) to meals in the hospital cafeteria to daycare for the family's other children, and more. All those costs not covered by insurance that strain a family's budget at an already stressful time. I'm grateful that Rizz opened my eyes to this need.

Getting into the spirit 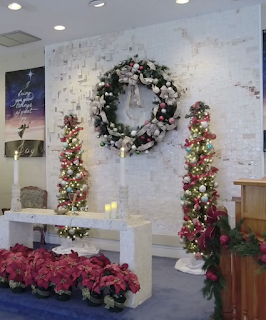 I was tooling around online today and found this, a photo of Henry's church in Key West, decorated for Christmas. This is the view I will enjoy on Christmas Eve as we sing carols. They celebrate communion, which my congregation doesn't, so that will be nice. It hearkens back to my childhood.

The pastor is a lovely man. I have worshipped with him at Christmas in the past, but to be honest, it's not his sermon I recall. Last year, when I was battling covid, Henry was very worried about me and so Pastor Steve asked the congregation to pray for me. I saw it when I watched the service live on Facebook. How can it not lift your spirits to know that a churchful of strangers, 1500 miles away, is praying for you? I am happy I'll get to thank Pastor Steve in person this year.

What a difference a year, two vaccinations and a booster make!

Stay safe, everyone. I am so very much hoping this will be the first normal Christmas we've enjoyed in years!