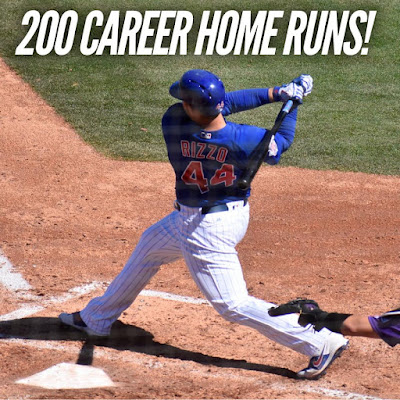 Last night, at home in front of the faithful, Anthony Rizzo hit #200. To put this achievement in perspective, his is now #9 on the list of Cub home run hitters. Of all time. And he's only 29.* He's passed Hank Sauer (who played in the 1940s) to enter this elite club. If he stays healthy, 300 is certainly not out of the question.

If you read this blog often, it's no surprise that he's one of my favorite Cub players. One of my favorite people on the planet. In addition to the home runs, he grinds it out, day after day. He doesn't just hit them out of the park. He'll do whatever it takes to get on base or advance the runner -- even if it's the more thankless walk or hit-by-pitch (I'm looking at you, Javy!).

AND he's let the camera catch him cry in frustration. Or apologize to an umpire (I'm looking at you, Donald Trump!). His honesty in his emotions and his unfailing good sportsmanship make him an excellent role model.

Best of all, he's grateful. He lives my "One Word." Every day, all the time. A cancer survivor himself, he's used his birthday as a fundraiser at a local grocery store chain (donate $1 in his name to help fight pediatric cancer). His foundation built the new parents' waiting room at Lurie Childrens Hospital.  He regularly visits the little patients at Lurie, and his twitter feed is full of words of encouragement to the kids and their parents.

In 2017, Rizzo won the Roberto Clemente Award as the player who best represents major league baseball through philanthropy. He donated the prize to survivors of Hurricane Maria. Because Clemente was Puerto Rican and died bringing earthquake relief to his home. 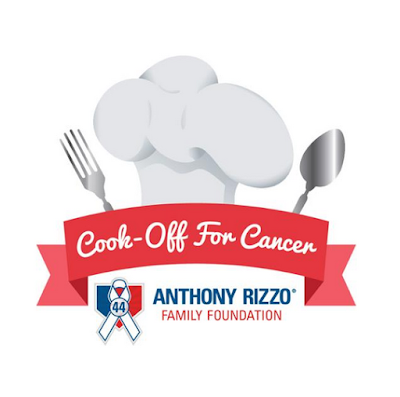 Later this month, he's hosting his seventh annual cook off. Popular Chicago chefs will prepare the meal and Cub players will serve. It's already sold out. Last year, it raised more than $1 million to battle cancer.

I wrote this off the top of my head. I'm sure if I took the time to research Rizz' good works that I did Hank Sauer's stats, I'd find much, much more.

Anthony Rizzo, thank you for making me happy and proud to be a Chicagoan and a Cub fan.