SPECIAL NOTE: This week, I also judge books by their covers. 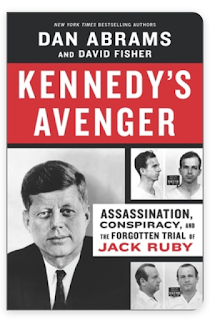 1. What are you currently reading?  Kennedy's Avenger by Dan Abrams and David Fisher. I first picked up this book because I wondered why, when the Kennedy assassination is discussed, no one ever refers to the trial of Jack Ruby to substantiate his/her theory. Now I know. I'm about halfway through and have found nothing to support a previous relationship between Ruby and Lee Harvey Oswald. None. Zip. Zilch. Looks like the facts will leave conspiracy fetishists disappointed.
Back in 1964, the trial focused on whether or not Jack Ruby understood what he was doing when he shot Oswald. If he didn't, he wasn't guilty of first-degree murder. Following the testimony, I'm riveted. Beginning in the late 1920s, when he was a teenager, Jack Ruby began getting knocks to the head. He boxed. He was beaten up in street fights. He was injured at the workplace (warehouse, lumber yard). He worked as his own bouncer at his Dallas strip club. One of his strippers (stage name: Penny Dollar) testified that, in 1963, she saw Jack bang a man's head on the sidewalk, look down at his victim and then ask her, "Did I do that?"
Re: the cover -- John F. Kennedy is our first President whose life was extensively photographed from his infancy (his parents were enchanted by the Kodak brownie box camera) to his murder (the Zapruder film). I'm intrigued that this is the picture Abrams/Fisher and the publisher selected for the cover. It's an official portrait, but it's grainy black and white and doesn't even attempt to capture his personality. I think they chose it because it takes him out of history and makes him, in the most human terms, an ordinary crime victim. He was murdered by Oswald, who was in turn murdered by Ruby. It's only when we look at the assassination (and the events surrounding it) as a crime, not as a cataclysmic event that sparked a sea change, that we can understand what really happened.
2. What did you recently finish reading? The Rooftop Party by Ellen Meisner. Dana Barry is knocking on 30 and still hadn't made it as an actress. Her student loan would go unpaid if not for help from her older sister. Her 1BR apartment is really a studio with the furniture arranged to create an alcove. She loves acting, but it had become increasingly difficult to support herself in New York City, doing what she loves. 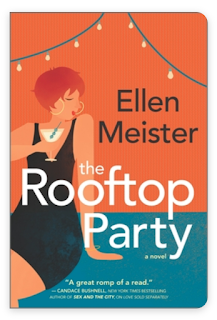 Out of desperation, Dana auditioned for a hosting gig on a TV shopping channel, got the job, and was surprised to find she was not only good at it, she liked it. She liked her coworkers, she liked being recognized on the street, and she liked being able to pay her bills. It's her enthusiasm for her new job that encouraged her to approach the new CEO with a marketing idea at the channel's annual rooftop party. Their encounter goes terribly wrong. The CEO takes a tumble off the roof. Could Dana in any way be responsible?
I liked this book so much that I'm sorry I didn't love it. The dialog is funny without being overly jokey. I liked the workplace setting. (I had no idea how a shopping channel worked; the intersection of marketing, retail and showbiz interested me.) The murder itself was well plotted. I spent about 80% of the book sure I knew who did it, and I was 100% wrong.
BUT there were things that really bugged me. Dana performs onstage with her theater group in a small auditorium under an assumed name. All she changes is her name and yet she's never recognized in the small theater as the lady from TV. Really? Even Superman donned glasses to become Clark Kent. It's a distraction in a subplot that really doesn't add anything to the story. And Dana's dad! He was heartless as a villain in silent movie -- just give him a mustache to twirl. I know Dana's daddy issues color her romantic relationship. I get it, I get it. I had a dad, too! But why not give him at least some redeeming qualities? After all, his wife and other daughter love him.
Re: the cover -- I love those colors! I don't often see orange and teal. I love the string of lights, the little black dress and the vodka martini. The cover put me in the mood for sophisticated fun.
3. What will read next? A novel.