1) George Harrison sings that he requires money, patience and time. Which of those three do you wish for most this morning? Patience. I've been in a pissy mood lately.

2) This was long one of George's favorite songs. He first heard it back in September, 1963 -- months before the Beatles became an international phenomenon -- when he visited his sister in Benton, IL. Is there a song that reminds you of a trip you took? "Rock the Boat" was popular the summer I took my first-ever plane ride. I was in high school when my cousin and I flew to Fort Lauderdale to visit her dad/my favorite uncle. This song seemed to be on the radio every time we got into his car (a red convertible). "Rock on with your bad self."

3) For years, George thought his birthday was February 25. When he was 17, he saw his birth certificate and learned he was really born on the 24th. His mother explained that he was born just before midnight on the 24th and she didn't get to hold him until early morning on the 25th, so she considered the 25th as his birthday. Do you know any interesting stories about the day you were born? I was born at the stroke of midnight. Midnight is legally not a time (not part of either day) and so the staff in the delivery room pressured my mom to "pick a day" so they could get it down on my birth certificate. In those days, mothers were heavily medicated when they gave birth, so she was still pretty stoned and didn't understand what they were yammering about. But she picked a day and time anyway: 12:01 am on 11/22.

4) When George was just 14, he met Paul McCartney on a bus en route to school. Tell us about a time when you met someone who ended up changing your life. Last year at this time (the day after Thanksgiving, 2020) I found myself in line at the post office with an elderly lady. She had a big bag of gifts, wrapped in green paper decorated with reindeer. She was clearly confused about the difference between the post office and The UPS Store. I told her I didn't think the staff of the post office would package her gifts for her. I took her over and showed her where the packing materials were. Our conversation took 3-5 minutes. Her mask was very low, her nose was exposed and when she spoke, her top lip was visible. I learned through contact tracing that she is, very likely, the one who gave me covid.
It was awful. I was sick for six weeks in all, and I was so frightened. My sense of smell is changed. But I learned a lot. First of all, my then new doctor turned out to be a keeper, sensitive and attentive. My local government was really there for me, too. In addition to contact tracing, I received offers to help me with medication and grocery shopping. THIS is what I want tax dollars spent on! I will remember this when I vote in our 2022 gubernatorial election. And last, anyone who dismissively refers to covid as "just the flu" can go fuck themselves.
5) Then 17, John Lennon was not interested in letting George perform with his band. He dismissed George as too young. Paul insisted George get a chance and the rest, as they say, is history. Tell us about someone who stood up for you and helped you succeed. My boss Aaron has been very supportive. He has changed my attitude toward my job for the better. I will miss him. I haven't posted about his resignation because I'm still too rattled by it.
6) In the 1970s, George took up gardening. He said that clearing away weeds and overgrowth helped him clear his head, and he was very proud of his jasmine flowers. What's your hobby? Why do you enjoy it? I wish George had taken up gardening when he was still with the Beatles. I watched Get Back and while I so enjoyed it, I found George to be (in my mother's words) "a real pill." ANYWAY, movies are my hobby. I watch them, I read about them. I love movies.

7) He also enjoyed playing ukulele and encouraged others to do the same. George often gave ukuleles as birthday and Christmas gifts. What's the last gift you received? My friend John gave me a gift card to my local movie theater. I didn't receive it until after my birthday because he ordered it from his phone and had it sent to the wrong email. (He was one digit off.) It's a great gift -- see answer above -- but the circumstances amuse me. It wasn't that long ago that John bitched and moaned about "millennials" who are "attached" to their phones and never look up. Then he got a new phone. Guess what: he now uses it for everything!

8) At the Academy Awards in spring 1976, another George was in the news. George Burns won an Oscar for his performance in The Sunshine Boys. Who was in the last movie you watched? Barefoot in the Park. Robert Redford was really funny. 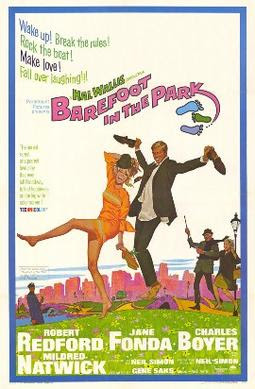