1) In this song, Selena Gomez sings about how eager she is to look good for her lover. What color do you look best in? I have a sweater made from green and blue yarn. I always get compliments when I wear it. But is it the green or the blue that I look good in? I don't know.
2) She compares herself to a diamond, which is the birthstone of people born in April. Do you know your birthstone? Is it a gem you often wear? It's topaz. When I was a kid, well-meaning adults would give me yellow topaz costume jewelry and really, who wants a yellow stone? Not this gal! It wasn't until I was older I learned it came in a variety of colors, including blue. Now that we're talking about it, I think I may look for blue topaz next time I want to refresh my earring collection.
3) Selena Gomez is a successful singer who has appeared on the Billboard charts more than 30 times. She also has her own cooking show on HBO Max. In each episode, Selena invites a chef to help her master a new recipe. She says that, off camera, the dish she enjoys making most is spicy miso ramen soup. What's your favorite soup?  Ah, seafood! There's a bar around the corner that has the most divine lobster bisque, and the clam chowder is right up there on my hit parade, too.
4) She was recently nominated for a Golden Globe for her performance in the Hulu miniseries Only Murders in the Building. Have you streamed anything interesting lately that you would like to recommend to Sat 9ers? I really liked Only Murders in the Building and Hacks. We Need to Talk about Cosby was very good, too, but I don't know that I recommend it. Reconciling Bill Cosby's accomplishments and his ugly, ugly deeds is important, but it's not fun television.
5) Selena Gomez provides the voice for Mavis Dracula, daughter of the Count, in the animated Hotel Transylvania movie and its sequels. In these family movies, Dracula and his family run a luxury hotel where monsters can vacation and get away from it all. The tone is similar to The Munsters and The Addams Family, TV shows from nearly 60 years ago. Caspar the Friendly Ghost has been entertaining children for generations. When you were a child, were you fascinated by ghosts, goblins, monsters and other such creatures? Sure. Remember Barnabas and Dark Shadows? I raced home from school to discover what was up with my favorite undead friend. 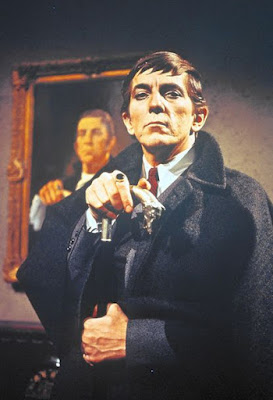 6) Selena's busy schedule is especially impressive when you realize that she lives with lupus, a chronic condition that can affect the skin, joints and kidneys. She credits "diet, routine and medication" for helping her avoid flare-ups. Do you have any tips that might help us increase our productivity and efficiency? First of all, kudos to Selena Gomez for all she accomplishes. Onto the question, I believe in Newton's law that a body in motion stays in motion. I find that the toughest part of getting shit done is getting off my butt. So I set a timer. I promise myself I only need to spend 2 minutes on a task. That feels doable, doesn't it? Not daunting at all. I often find that once I'm doing, I keep doing.

7) In 2015, when this week's song was popular, Leonard Nimoy died. Without looking it up, do you know why he was famous? Poor Mr. Spock. He died from COPD. I recall him, toward the end of his life, wishing he'd never been a smoker.

8) Also in 2015, NASA announced that water had been found on Mars. Do you follow news about science and space? Nope. But this reminds me of an old boyfriend. He could prattle off the names of all the missions and their astronauts. As a little boy, he dreamed of walking on the moon, and as an adult he still devoured anything space-related.

9) Random question: What was the best year of your life? 1992. It's the only time I can recall ever achieving work-life balance. I was in love and my career was chugging along nicely.