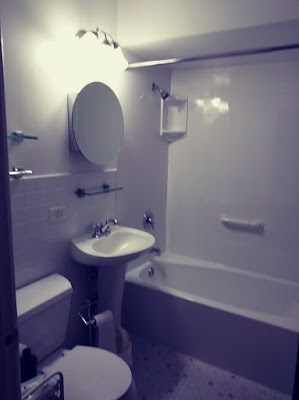 I got home this morning and have been putting my NEW bathroom together. There's a lot about the process I didn't like, but I'm too tired and too happy right now to post about it. Instead, let's just gaze at the blinding whiteness that is my bathroom. 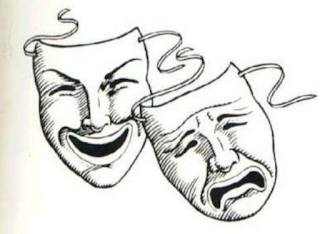 •  Reg called me today. He was upset, worried about money, stressing about all the responsibility of Henry's recovery. I was so glad he chose me to reach out. So happy I could make him laugh. He's been so tense and remote lately that I was afraid we wouldn't be friends anymore (apart from Henry). Clearly that isn't the case. I'm so relieved.

•  Henry is doing much better. He is lucid, speaking in both Spanish and English. He is now out of ICU and in a private room. He can do everything that's been asked of him so far: identifying shapes and memorization. He's still angry all the time. He wants out of the hospital, and wonders bitterly why those who claim to love him aren't helping him go home. But the nurses assure Reg that this is to be expected.

•  No disability insurance. It looks like Henry didn't check that box when he signed up for benefits.  It is frustrating that he could be receiving $450/week from his employer, but he didn't take the option. A few more dollars from each paycheck would be paying dividends right now, but there's no going back and changing it.


•  A surprising, but perhaps not so surprising, complication. Henry's blood alcohol was very high at the time of the accident. His response to treatment aligns with someone suffering from withdrawal. Henry is an alcoholic. It upset me to hear it said aloud, but it doesn't surprise me. One of the reasons I don't like his friend Phyllis -- who he'd been drinking with the night of the accident! -- is that I've never seen that woman without a drink or a joint in hand. And when I've visited him over the holidays, he drank wine literally all day. I would stop after two -- maybe three -- drinks, tops, and switch to Coke. But not Henry. When I busted him for it, he'd say, "It's my vacation," or "I can handle it." He cannot. Reg said sadly that he and Phyl had been enabling Henry. I responded we all had. Henry is such a sweet soul, you don't want to spend your every moment together nagging. And ultimately, the one responsible for Henry's drinking is Henry.

This is so big. Henry's accident has had an enormous impact. I'm still trying to process it all, weeks later.