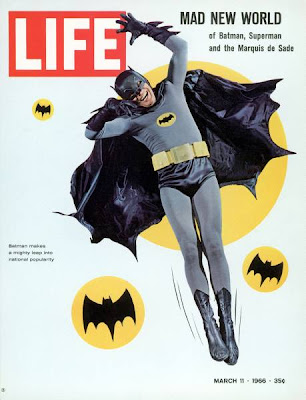 Let me state it plainly -- In this Gal's world, there is only one real Batman: Adam West. From 1966 to 1968, he fought crime in our living rooms. Every week. Same Bat Time. Same Bat Channel.

Here are 13 of the evil masterminds that he faced, and faced down, leaving Gotham City safe for good citizens.

1) The Riddler. (Frank Gorshin) The first heinous criminal Batman brought down. Joyously, dementedly evil, he always got such a kick out of crime. John Astin donned the green tights festooned with question marks once, but Gorshin played the part more often and more memorably.

2) The Penguin. (Burgess Meredith) The villain who vexed the Dynamic Duo most often. He had his fans, obviously because he appeared on the show more than 20 times, but The Penguin was my least favorite. I think it was all the cigarette smoke that turned me off.

3) The Joker. (Cesar Romero) I've always found him to be their most worthy adversary. He was very creative, a snappy dresser, and had his own theme music. I love how, if you look close, you can see his mustache under the white makeup. I know the clip below bounces around a lot, but I think it shows The Joker to his best advantage and plays his signature tune several times. Plus, I love it when the drunk looks up, sees The Joker on TV and says, "That's my mother in law."

4) Catwoman. (Julie Newmar) Didn't you love the chemistry she had with Batman? Lee Meriweather played the famous cat burglar in the Batman movie, and Eartha Kitt took over in a couple later episodes of the show, but they didn't generate the same heat with The Caped Crusader.

5) Mr. Freeze. (George Sanders) He was a tragic man, really. During a battle, Batman spilled a jar of Instant Freeze on him and now he must wear a special refrigerated suit. Without it, he'll perish! No wonder he's always so pissed at The Dynamic Duo.

6) Egghead. (Vincent Price) I found his puns were eggs-cruciating. But that could be because, unlike Egghead, I have a normal sized brain. He had a huge, egg-shaped cranium to hold his superior, oversized brain. Yet with all his intelligence, he couldn't defeat Batman and Robin because they had right on their side.

7) Chandell. (Liberace) Chandell didn't start out as a villain. In fact, he was a gentle soul and a great pianist. But he went astray one day when he got lazy and, during a command performance at the White House, he used a player piano. His jealous twin brother Harry (also played by Liberace) blackmailed Chandell so he was forced to turn to crime. Chandell is memorable because he was Aunt Harriett's only love interest.

8) Shame. (Cliff Robertson) A very bad cowboy. Not only villainous but also none-too-bright. Still, I loved his episodes. Especially when the Caped Crusaders feed Shame's kerchief into the Bat Stain Analyzer and find he spilled a combination of avocado and jalapeno on it. Hearing the results, Robin exclaimed, "Holy Guacamole, Batman!"

9) The Bookworm. (Roddy McDowell) As well read as Shame is ignorant, The Bookworm even had a booklight in his fedora. He also had his very own tricked out vehicle, The Bookmobile.

10) King Tut. (Victor Buono) What a 60s relic this plot is! King Tut was a brilliant professor of Egyptology who gets hit on the head by "hippies" during a campus riot and comes to as an evil genius compelled to steal.

11) The Siren. (Joan Collins) Popular singer and harpist Lorelei Circe had a second personality -- arch criminal The Siren. She could put any mortal man under her spell by hitting a note three octaves above a high C. She even mesmerized Chief O'Hara!

12) Ma Parker. (Shelley Winters) She called herself "the greatest mother of them all." Certainly she could count on her three sons, who made up her "gang." She seemed to regret her life of crime, because she never stopped trying to discourage her only daughter, "Legs," from taking part in their illegal activities.

13) Minerva. (Zsa Zsa Gabor) The last criminal mastermind of the TV series, Minerva seemed to be an upstanding and glamorous Gotham City entrepreneur. She ran a luxury spa, frequented by all the local millionaires and millionairesses. But her signature scalp treatment was really The Deep Secret Extractor, and it enabled her to learn the location of all her clients' valuables ... and steal them!

For more about the Thursday 13,