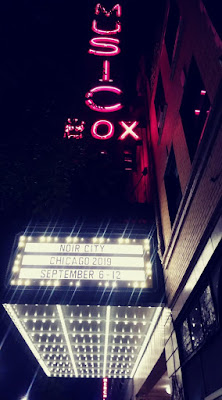 What is the most fun thing you have ever done? Ever? That's a little broad isn't it? The most recent fun thing I did was Friday. I went to the opening night of Noir City Chicago film festival at the Music Box Theater. It was a nice night out with Will from my movie group. It left me happy and relaxed.

Are you left-handed or right-handed? I am right-handed. Or, in the words of my chiropractor, "highly right dominant."

What is the nicest thing someone has ever done for you? Again, EVER is just too broad for me. The first kindness that comes to mind was my friend Nancy over 4th of July weekend. She reached out to include me in her family's plans. I didn't take her up on it, but that's not the point. John, my running buddy over the 4th since (gulp!) the 1980s was ill and I felt sad and alone. Just the invite was enough to brighten my day. How thoughtful of her!

What is the biggest animal you’ve seen in the wild? First of all, I have never been "in the wild." I have hiked through state parks and forest preserves, but I've never been to a remote tropical island or anything. And you know what? I don't want to. Now that we have that out of the way ...

I saw a whale show once at SeaWorld in San Diego. I have seen elephants many times at various zoos. The biggest animal I have ever seen, roaming loose, is a deer.


What is the smallest animal you’ve seen in the wild? Geez, do we really have Sunday Stealers who regularly travel to the Cocos Islands? Sparrows are very common here in Chicagoland, and they are very small, often weighing little more than an ounce.

Do you ever have funny dreams at night? Sure, on occasion. 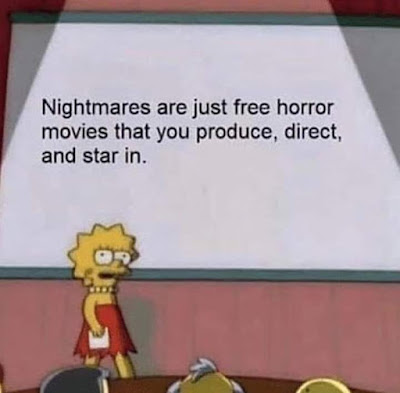 If you could make a law for your country, what would it be? I'd make it illegal for civilians to own assault weapons.

What would you do if you were invisible for a day? Eavesdrop. 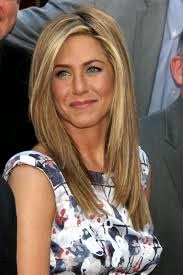 If you could be someone else for a day, who would you be? Jennifer Aniston. Because she's pretty and likeable and I'm sure she's much nicer than that icky Angelina.


What is your daily routine. Get up, get out of bed. Drag a comb across my head. (Wait! That's Sir Paul's daily routine!)


What would your perfect day be like? I would sit in the sun and watch the Cubs reign victorious at Wrigley Field. All the drama would take place on the field, none in my real life.


How old were you when you learned to read? First grade.

What is the most interesting thing you know? If you take cranberries and stew them like applesauce, they taste much more like prunes than rhubarb does. (OK, I stole that from Groucho.)

What makes you nervous? Leavin' on a jet plane.

What is your favorite flower? Carnation. They come in so many colors!


Have you ever ridden on a horse or any other animal? Yes.

What time do you go to bed? When I'm tired.

What time do you get up? When my cat Reynaldo lets me know he's hungry.

What is something that is always in your refrigerator? Coke.

I had a very, very disturbing call on Thursday with Henry. I'm still not quite over it. Since his accident last October, Henry has not been the same. He has come a long way. He goes to church regularly, he participates in his the poetry guild. Some days, when we talk, he is his happy old self. But he is always in some discomfort, he takes a handful of pills every day, and his coworkers are always on alert for his seizures. This stress takes its toll. 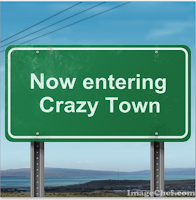 And Thursday night, pain and stress and sleeplessness and wine led us into Crazy Town. He told me the reason for the call was a quick check in, wanting to hear how I was healing after my oral surgery. I was dopey* enough to believe him. That is not why he called.

He called to whip himself up into a panic, and he wanted an audience.

I explained to him that no one is going to take his house over $7,000. That he needs to talk to his insurance company about working out a payment plan.

I told him it would cost the insurance company more than $7,000 to evict him. Lawyers and court costs, etc. Call them. Work out a payment plan.

No, I don't understand how corrupt Florida is. They're going to take his house. He's going to be homeless.

I suggested he talk to his HR rep. She can be his liaison with the insurance company.

I tell him to call his minister. He says his minister has told him to, "Shut up and get over it." I wanted to laugh, because I mean, really! Not even in a Monty Python skit would a minister talk to a parishioner that way. But Henry was really, sincerely in pain. So I asked him where his husband Reg was.

OK, what about his best friend Phyllis? Here I am, in another time zone and trying to heal. I don't know how to handle this. At least Phyllis could get in the car and drive over.

He doesn't want to talk to Phyllis. What he does want to do is "remove himself from the situation."

I told him it was cruel to bring that up in a conversation with me. I am more than 1000 miles away. I can't help him. How could he so vicious to someone who loves him like I do?

By now he's really slurring. He says he can't do this anymore. He simply cannot.

He said OK, and that he loves me.

I called Reg. And awakened him from a sound sleep. He was surprised to hear from me, and saddened by the turn of events, but strangely calm about Henry.

He told me they have had no conversations with the insurance company, so that whole "pay by check or credit card" call never took place. Reg told him not to worry, that they have the funds to pay the bill from their Gofundme. He said he suspected Henry had been drinking with Phyllis. He said he would take care of it from here.

I was too wound up to sleep. Between Henry and Reg, I'd been on the phone for two very intense hours and now my heart is beating out of my chest like a character in a Warner Bros cartoon. This is not good for me. I'll be honest: I resented it.

The next morning, after a sleepless night, I called the office and told them I'd work from home. I got a text from Reg, thanking me for being there Thursday night, and telling me that Henry claimed not to remember talking to me at all. Reg says he could tell that Henry remembers, and is embarrassed.

I know we're all doing the best we can here. I'm just exhausted. I don't feel well. I have money woes. I am not a shrink. I am not equipped to handle this.

Love is not enough. I am learning that, slowly and very late in life, I guess. I cannot love him well.

1) This song begins with, "First of all, let me say I must apologize ..." Who most recently apologized to you? Friday Joanna apologized for standing me up for dinner. I really didn't mind that much. I didn't feel like spending the money on a meal that I may not enjoy because I'm still not 100% over Wednesday's dental work.

2) Gwen Stefani sings that she acted like "sour milk on the floor." Is there milk in your refrigerator right now? What about non-dairy creamer? There's a quart of 2%.

3) In the video, Gwen wears several different pairs of stiletto heels. What are you wearing on your feet as you answer these questions? I'm barefootin'.

4) Mrs. Stefani named her daughter "Gwen" after a stewardess in the book/movie Airport. Who was your favorite character in the book you just read, or movie you most recently watched? It's Thelma (pronounced "Telma"). The Viscountess Furness, thank-you-very-much. I'm reading a biography of Gloria Vanderbilt, and Thelma was her aunt, her mother's identical twin.

She was her own girl in the 1930s, a time when being an individual wasn't necessarily valued in a woman. Her sister (Gloria Vanderbilt's mother/Anderson Cooper's grandmother) was a perpetual victim. Not Thelma. Despite family pressure, she refused to stay married to a man who abused her, just because he was heir to the AT&T fortune. She brought her camera, not a gun, when she went on safari, and hung around with Charlie Chaplin, with whom she discussed becoming a movie producer. She was romanced by a Broadway leading man and the Prince of Wales (right before he met Mrs. Simpson).

Now I'm not done with the book yet. Maybe I'll change my mind about her. But right now, I think she rocks.

5) Gwen is a distant cousin of Madonna's. Are there any performers in your family? My cousin is a musician. He teaches at a community college but his heart is in performing. Often, when Broadway touring companies come to Chicago, he's in the pit. He's played in shows like The Lion King, Beautiful and How the Grinch Stole Christmas. I'm very proud of him.

6) In high school, she joined the swim team not because she enjoys swimming but because she wanted to lose weight. Are you doing anything (dieting, participating in an exercise regimen) in order to shed a few pounds? No, but I sure should.

7) Before she became successful, Gwen worked at the makeup counter in a department store. What was the last thing you purchased? Did you buy it online or at a store? Our tickets to the Noir City Chicago film festival. I bought the online.

8) Gwen has gotten a great deal of publicity for her romance with country star, Blake Shelton. What's your favorite Blake Shelton song? I know he sang a song called, "Mine Would Be You" because it was once a Saturday 9 theme. So I guess, since it's my only, it's also my favorite.

My bright spot is noir 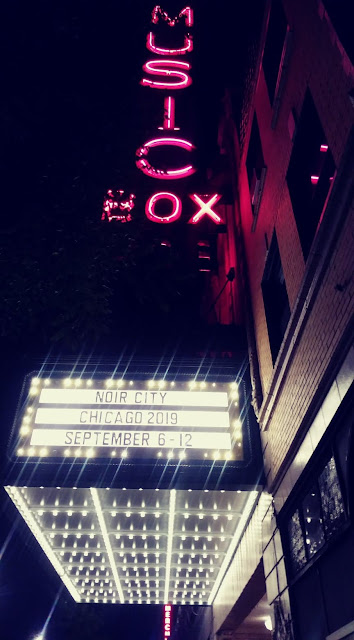 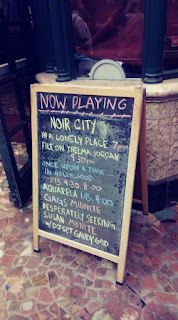 Friday night Noir City Chicago opened, and Will and I were there! So was my TCM boyfriend, festival host Eddie Mueller.

This festival is a celebration of the stylish, dark and cynical style of filmmaking that reached its height in the 40s and the 50s. We saw a Barbara Stanwyck movie that was new to both of us  -- The File on Thelma Jordan. This was exciting because Will loooooooves Stanwyck, and for him to discover one he'd missed was an event.

Before the movie, we met for gelato and caught up. I enjoyed finding out about his work. Six years we've known each other, we've really only talked movies and pop culture. Until tonight, I truly didn't know what he did for a living.

Part of why we had the time to chat one-on-one is that Joanna, who was going to join us, didn't. She had a cold. I felt like yelling, "They took a saw to my jaw and I'm still going!" But that would be childish. Still, I was annoyed. Sometimes she's brings a little too much drama to the party. (Fortunately I myself am the perfect companion.)

I've had a rough few weeks. (More on recent events later.) I needed this night at the movies.