1) This song is from the hit musical West Side Story. It has just been remade by Steven Speilberg. Are you interested in seeing the 2021 version? Eh. I appreciate Steven Speilberg but WSS has never been one of my favorites. If I stumble across the new version here at home I'll watch it, but it's not one I'll go out of my way to catch at the theater.
Now this is the one I'm waiting for! I'm so happy that Lucille Ball is getting her due as an artist and a trailblazer. (Wait for her off-camera chuckle at the end. Kidman nailed that.)
2) Growing up, Crazy Sam thought this song was called, "A Place for Us." Tell us about a song whose title or lyrics you got wrong or misheard. Many. This is the first one that comes to mind. "Groovin'" by The Rascals. The lyrics really are, "Life would be ecstasy, you and me endlessly groovin' ..." I thought the lyrics were, "Life would be ecstasy, you and me and Leslie groovin' ..." Leslie? Who was Leslie? Why was she there? Wouldn't groovin' be more romantic with just two? (Yes, as a child I was quite the ninny. Still am at times.)
3) Barbra Streisand sings of longing for "time to spare, time to learn and time to care." The holidays are often too busy for many of us. With Thanksgiving almost upon us, do you wish you had more time? I'm good. I've been stressed lately but over work, not the holidays.
4) Early in her career, Barbra was pressured to have her nose fixed. She stubbornly refused, and did rather well anyway. Tell us about a time you resisted pressure. To this day I've never smoked. Not pot, nor a cigarette. And I won't.
5) In the late 1960s she briefly dated Canadian Prime Minister Pierre Trudeau, father of current PM Justin Trudeau. Obviously Barbra knew what became of Pierre and his family without having to look them up. Without the advantage of Google, do you know where one of your former loves is in 2021? My mom was good friends with the mom of my first boyfriend. I used to get regular updates on him that way. But now both moms are gone, so if I were to catch up with him, I'd have to resort to The Google Machine.

6) One of Barbra's hit movies is The Way We Were, a love story about hopelessly mismatched lovers. Streisand always wanted to do a sequel and worked with a screenwriter on a treatment. Her costar, Robert Redford, refused. He simply was not interested in revisiting his character. Is there a movie series that you especially enjoy?  The Thin Man movies. Love, love, love them. 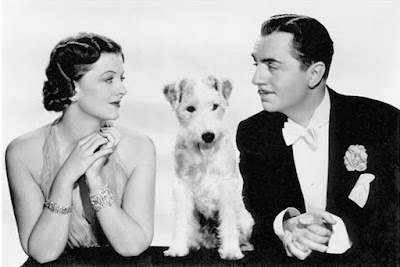 7) Barbra met her husband, James Brolin, at a dinner thrown by friends. They hit it off immediately, but he had to leave the next day to begin a movie in Ireland, so they began their romance over the phone. Do you enjoy long phone calls? Would you prefer video calls (Zoom)? I'm a phone fan. Just naturally blabby, I guess.

8) On July 1, 1998, two years to the day after their first meeting, Barbra and Brolin married. It used to be that brides were advised against wearing white for their second wedding, but Barbra ignored that, wearing a white beaded gown. Do you believe brides should still avoid white the second time around? A bride should do whatever she wants. It's her day.

9) Random question: Is anyone on your bad side this morning? I'm trying to be positive. Not always succeeding, but trying!

I have had Roy Hobbs for nearly a month now, and he's fine. Of course he is. Critters are my thing.

Yes, he was abused by his previous humans. The shelter warned me there might be problems. I knew there wouldn't be. I connect to animals. I get them, and they trust me.

When I first adopted Connie, nine years ago, she'd been labeled "special needs" because of her health problems. The shelter warned me I might have a hard time dosing her with her medication. I knew I wouldn't.

This is what I do. I'm good with animals.

I don't make friends so easily anymore. I can be insensitive and impatient with people. Yet I have almost limitless sensitivity and patience with animals.

So while I acknowledge and appreciate my well of compassion for those who are smaller, weaker and dependent, I realize I need to work on my compassion for others.