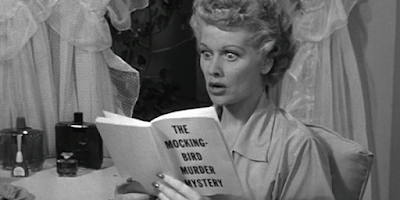 1. What are you currently reading? Lucille: The Life of Lucille Ball by Kathleen Brady. Have you noticed Lucy is turning up everywhere these days? She's featured on TCM's current The Plot Thickens podcast and a big-budget feature film, starring Nicole Kidman and Javier Bardem, will be out in time for Christmas. So I figured I'd jump on the bandwagon.

This biography tells us how Lucille Ball evolved into Lucy Ricardo, but also makes it clear that the two were very different. Both were driven, but Lucille was serious, kind of sad, and dedicated to her craft.

It's amuses me that this woman -- now considered an icon of family entertainment -- could be way less than wholesome. She was the first of her crowd to wear makeup, even though she couldn't afford it (she concocted the rouge herself using red crepe paper). At 14, she began dating a 21-year-old involved with his family business of bootlegging. She tore through town at high speeds in her boyfriend's car, even though she had no license. She caused further scandal by dropping out of her small town high school to go to New York (alone) to study drama. Her mother supported her because, as she admitted to disapproving neighbors, she couldn't stop her. As a struggling actress, Lucille paid the rent by posing (like many young women did) for racy photos. Lucy, we hardly knew ye.

2. What did you recently finish reading? Last Girl Ghosted by Lisa Unger. "Think twice before you swipe," is the warning on the cover, so you may expect this thriller to be about online dating. And it is, sort of.

Our narrator, Wren, seems to live an enviable life. At 28, she owns her own home, has a thriving career, and a surrogate family, courtesy of her best friend Jax. But she doesn't have a boyfriend. Jax encourages her to join Torch, a dating app.

Her first two hook ups are just "eh." But then she meets Adam. She falls in love, for the first time in her life. He's very private, but it doesn't bother her because she's a loner, too, and they're "taking it slow." Suddenly, he disappears.

No email. No text. No social media profiles. All erased. It's as though Adam never existed. What the hey?

I enjoyed this part of the book. A lot. But then it veers off into Wren's very troubled past, and I admit, I didn't much care. It was well written and, I suppose, well plotted. But it didn't feel like the thriller I'd picked up, or even the same book I began.

Also, Wren takes sooooo long to figure out Adam's real identity. I cut her slack on this because she's a columnist, not a sleuth. But there is a detective in this book. What's his excuse? I expect the detectives to be at least as clever as little ol' me.

So I don't recommend this book, which makes me sad. I loved Confessions on the 7:45, Unger's previous effort. I wanted to love this one, too.

3. What will you read next? A biography.

Some in my Zoom movie group drone on and on and are obnoxious. Worst of all is Marvin. He's about 40 and new to classic film, which he believes makes his opinion fascinating. Every week he says, "This will shock you, but this is the first I've heard of Rita Hayworth/film noir/Howard Hawks." Then he goes on, and on, and on, lecturing the rest of us. I feel like shouting, "NO, MARVIN! I'm not 'shocked.' I'm too apathetic about you for my reaction to rise to 'shocked.'" Instead of shouting, I usually just turn off my camera and do dishes or balance my checkbook until he shuts the fuck up.

But not Monday night. Monday night I remained engaged, exchanging snarky comments in the private chat with Elaine. She told me about how she felt "forced" to go to dinner with Marvin and his wife, our moderator Will, and annoying Betty. I joked that I imagined Marvin opening the menu and announcing to the table, "This will shock you, but this is the first I've heard of empanadas." I could see Elaine smile on camera and start typing.

"I know! I wish someone would cut out Marvin's tongue."

Only she didn't put that in the private chat. She shared it with the whole group. Including Marvin.

Elaine was, naturally, mortified. No one said anything to her, so perhaps he never saw it. That's what we hope, at least.

"Steve Kornacki at the Big Board!" 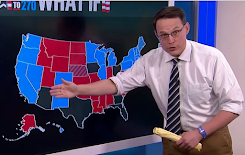 Six of my favorite words. He makes MSNBC's coverage. He's so passionate, you can't help but care what happens in tiny Bath County, VA.