The press coverage that accompanied the passing of Davy Jones and the fatherhood of Barry Williams leads me to believe that the spot our girlhood idols hold in our hearts is enduring. With the help of the Huffington Post and back issues of 16 Magazine, here's a list of 13 beloved teen dreams.

There are many who started as fave raves (Elvis, Sir Paul, John Travolta, Johnny Depp) but went on to accomplish much more. They're not included on my list because I'm focusing on those whose careers peaked with the love of 13 year old girls.

And now, in reverse chronological order, I give you 13 beloved dreamboats. Did you doodle one of their names alongside yours?

1) Jason Priestly. The good boy, Brandon Walsh, on 90210. Girls followed his adventures at The Peach Pit and in his beloved car "Mondale," all the while dreaming of a career as a journalist. Oh, and he had the prettiest eyes in prime time! Since that show went off the air in 2000, he's worked regularly in both TV and movies. 2) Jonathan Taylor Thomas. JTT broke hearts as Randy, son of Tim "Tool Time" Taylor on Home Improvement. It's no surprise, since he began his career as the son of no less a heartthrob than Greg Brady (Barry Williams) on a Brady Bunch spin-off. While adored for his All-American Boy looks, he's not visible in one of his most memorable roles -- the voice of young Simba in The Lion King.


3) Kirk Cameron. Growing Pains was a Top Ten show in the mid 1980s in large part due to "Seaver Fever," the affliction that kept little girls up nights, dreaming of kissing Mike Seaver. Kirk was considered so hot among the Teen Beat set that he was the star that commanded attention, not Leonardo di Caprio or Brad Pitt -- two actors who shared the screen with him on that show.


4) Malcolm-Jamal Warner. Theo Huxtable grew up before our eyes as the only son of TV's most beloved family. On The Cosby Show, he thought he was sooo smooth, and a generation of young girls agreed. Theo's academic struggles in a family of overachievers (dad a doctor, mom a lawyer) made him especially compelling and lovable. Warner has enjoyed a career, if not ongoing superstardom, after Theo, starring in Malcolm & Eddie on the UPN. Now in his 40s, he's still a working actor and has added "poet" to his CV.

5) Rick Springfield. Oh, Dr. Drake! Noah was of the sexiest doctors to ever don scrubs on General Hospital (and, I suspect, the inspiration for Joey's Dr. Drake Ramoray character on Friends). His recording career was very respectable. I love "Jessie's Girl," which won him a Grammy in 1982. I was surprised to learn while researching this that he was nominated an additional 3 times before the 80s ended.

6) Willie Aames. Curly hair. LOTS of curly hair! First he was Tommy Bradford on Eight Is Enough. Then he was Charles' best friend on Charles in Charge. He did a stint on a soap (The Edge of Night) and wrote an autobiography, Grace Is Enough, that chronicles the rise of his TV star, his descent into sex and drugs, and redemption through Christ.

7) Shawn Cassidy. The pretty Hardy Boy went gold with bubblegum remakes like "Da-Doo-Ron-Ron." David's younger half-brother has said that, for him, having a TV show and recording career was a rite of passage in the Cassidy household, something a boy did, like making the softball team. I think if David had taken it all as lightly, he'd have been happier.

8) David Cassidy. He was very nearly the Thinking Girl's Fave Rave. Life Magazine put him on the cover, christening him "Teenland's Heartthrob." Rolling Stone gave him a platform to express his angst. He was nominated for a Grammy as Best New Artist. Keith's role on The Partridge Family sitcom was negligible -- Danny was the catalyst for almost every plot -- but we all tuned in to hear him sing on what was undoubtedly a precursor to music videos at the end of the episode. Could anyone else make velour jackets or puka shells so dreamy? 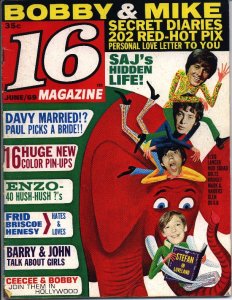 9) Bobby Sherman. I admit it -- this one was mine. His photos covered my locker, my school folders, my bedroom door. I may not be able to remember where I left my sunglasses, but I will never forget him as shy, sensitive young Jeremy Bolt from Here Come the Brides. Also, Bobby Sherman was my first concert. My ticket was $3.50. Adjusted for inflation: $20.75. (You know, it still sounds cheap. Considering how badly he sang, it also sounds about right.)

10) Barry Williams. Ah, Greg Brady! We loved watching you work on your bike, learn to drive and accidentally dye your hair orange. The Brady Bunch never cracked the Top 20 Neilsen ratings in its five-season primetime run, but Greg's dreaminess has helped ensure its place in TV history.

11) Davy Jones. A naturally gift singer and mimic, he had a  career on the London and Broadway stage. But it was on TV, as one of the "pre-fab four" that he won international fame. The outpouring of love and sadness that accompanied news of his death tells us how important he was to a generation of girls who had his photo in their lockers and carried a Monkees lunchbox to school.

12) Paul Petersen. First as a Mouseketeer, then as Donna Reed's TV son, he regularly enchanted little girls until he was 20. To hear him tell it, being a child actor was a sad and bruising experience. He began an organization called A Minor Consideration to protect young performers and has been  upfront about insisting Kate Gosselin and Nadya Suleman to do right by their broods.

13) Ricky Nelson. Including him on this list breaks my heart because I think it broke his. He shared the screen with John Wayne. He successfully fused rock/country/folk. No less than Paul McCartney proclaimed him a great and even influential balladeer. And yet he never overcame being the dreamy baby brother who came into our homes every week with Ozzie and Harriet.

Is this what they mean by "win-win?"

Last time John and I had dinner together, he was affectionately amused by the Cubs logo on my phone screen and the one on my jacket. "Promise me we go to a game this season!" he said.

Well, as luck would have it, The Houston Astros will be in town, within the Friendly Confines of Wrigley Field, the week of John's birthday! I got us OK seats (infield terrace) for Saturday and if we get there early enough (yeah, right) we'll get free Cubs wristbands.

He was so happy, telling me what a generous gift this is. Yeah, for ME, as well. There's no where I'd rather be than Wrigley Field. It's a warmish, drizzly spring day, so I went into my closet looking for the little hooded golf jacket I've had for years. Imagine my shock, dismay and heart ache when I couldn't get it to reach around my big, fat middle.

This is a man's jacket!

I have been working out. I know I still eat more than I should, but I am eating less than I used to and better than ever before. And yet I think I have actually gained weight.

How depressing is this?

Because if I don't do it, it doesn't get done

Today is Administrative Professionals Day. I wasn't aware of it because I didn't pick up flowers for my own desk this week. It's the signage at the florist shop that has given me a heads-up in the past.

The head of HR sent an email to everyone in the agency saying that since all of our admins had enjoyed mimosas for breakfast, courtesy of the company, we should cut them some slack if they seem a bit loopy. So everyone who works here got a subtle reminder that today's the day we're supposed to say "thank you."

Today in our status meeting, I announced that I was going to Macy's (which is attached to our office by a pedway) to pick up a box of Frango Mints and a giftcard and I'd put everyone in the room's name on it and everyone owed me $5. That would give our secretary 4 pieces of chocolate and a $30 Macy's gift card. THAT I was very willing to do because there are only 7 people in our immediate group. That seemed imminently manageable to me.

No, my boss said, there are other people on our account who would contribute if only they knew about it. Um, they DO know about. Everyone got the email from HR this morning. For me, it was the principle of the thing. I'm not going to run around to *23* people, begging for money and getting signatures on a card. I'm just not. Who died and left me Mommy?

My boss realized he was pushing it and he did the incremental collection and he got the card signed. All I did was buy a bigger box of chocolates (I traded up to Godivas) and a more expensive gift card ($100).

I dunno ... maybe I'm still mad because I didn't get flowers from my teammates last fall when I was in the hospital. Because, since I was busy having internal organs removed, I couldn't run around collecting cash and signatures for the card.