1) The lyrics refer to "sweet destiny." Do you believe in destiny? Not really. OK, sometimes. I admit it: it depends on when you ask me.

2) This week's artist, Mariah Carey, has something to fall back on. She studied cosmetology and worked as a hair sweeper in a salon. When you get your hair cut, do you socialize with the stylist? Yes. I've known him forever. Our families have known one another forever. So we have always have a lot to catch up on. 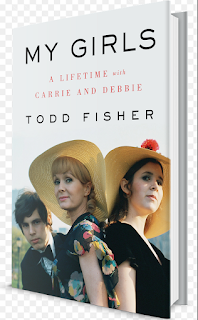 3) She isn't likely to turn to cosmetology any time soon. Mariah is currently on the best seller list with her autobiography, The Meaning of Mariah Carey. Was the last book you finished fiction or non-fiction? The last book I finished was My Girls, Todd Fisher's memoir.
4) So far, more than 800 people have reviewed Mariah's book on Amazon. Do you review products/services online? I review every book I read on Goodreads. It helps me keep track of what I read/when. If I'm really impressed with service, I'll leave word on Yelp. I just stayed at an Airbnb and left a review there.

5) When she was a high school student, she was nicknamed "Mirage" because she skipped class so often. Did you ever play hooky? I often disappeared after lunch. Especially if the weather was good. I really hated high school.

6) Mariah doesn't apologize for spoiling her dogs, who have been known to travel by limo. Do you know anyone who treats their pets like people? That would be me.

7) In 1990, the year this song was popular, Martina Navratilova won the Wimbledon Women's Singles Tournament. How's your tennis game? Non-existent.

8) Also in 1990, Pope John Paul II toured Mexico. Have you ever visited our neighbor south of the border? Nope.

9) Random question(s): There are Gofundme campaigns for many purposes. Have you ever solicited funds online? Would you? I don't think so, but I'll never say never. After my friend Henry's accident, his husband Reg asked for help to pay the bills during Henry's rehab. It raised $12,500 in just six months. When he later found out about the Gofundme, Henry was mortified, but they really needed the money to stay afloat. My coworker, Carla, started a Gofundme for a friend of hers who was furloughed and then got sick and is facing eviction, which would mean being separated from the much-loved dog she rescued. This fund raised $1,000 in a week. If I found myself in such catastrophic straits, maybe I would start a fund.

On the other hand, some people seem rather shame-free in the things they expect others to pay for. And, speaking of shame-free, if you've had your Gofundme up for more than 30 days and no one has given you a cent, take the sucker down. Show some pride!