1. What is the worst treat to get when trick-or-treating? Anything that came unwrapped while bouncing around in my bag. My mom was a stickler for going through our stashes and ruthless when it came to tossing the unwrapped/unsealed.


2. What character from any horror film would you most like to play? The title character in She Wolf of London. She's a pretty, very well dressed heiress who fears she's picked up the family gene for going all hairy and killing people. It's especially kitschy because she's played by June Lockhart (Lassie's mom) and her boyfriend is played by Don Porter (Gidget's dad).


3. Would you rather be a zombie, alien, or psycho? (why) An alien. From Mexico. Because I would annoy Donald Trump.

4. How many Halloween, Friday the 13th, or Nightmare on Elm Street movies combined do you have on dvd? None.

5. What is the scariest movie you have ever seen? Psycho is by far #1. Gravity is #2. The idea of being so small and vulnerable in the infinite expanse of space makes me want to wet my pants. And while it wasn't a theatrical release, IT is #3. I don't like clowns. Really, I don't.

6. Lamest costume you have worn on Halloween? One of the store bought ones my mom picked out without consulting me.

8. Friendly-faced jack o’lantern or scary one? If I were to carve one, this is what it would look like. I just wish the Cleveland Indians saw it as more scary than friendly.

9. Have you ever had nightmares about a scary movie character chasing you? No.

10. Best thing about Halloween? I can have a taffy apple for breakfast. And I shall.

11. Strangest Halloween custom you’ve heard of? Strange but kinda cool: I've heard that in some Latin countries, it's not unusual for families to picnic on Halloween at the cemetery so they can visit with their loved ones.


12. Person in your family who most likes Halloween (not counting yourself)? I got nothin' for this one, either. Sorry.

13. Are you superstitious? If so, name at least one superstition of yours. I remember what shirt I was wearing when the Cubs lost a playoff game, and then I'm careful not to wear it on game day again.


14. What's your best Halloween memory? My oldest friend's dad -- a really great guy -- drove us to another town to trick or treat. We still got the same Snickers and Kit Kats, but still, they felt exotic.

15. At what age were you allowed to go trick-or-treating by yourself? I think I was about 12. But I don't recall, for sure. My mom was a worrier when it came to Halloween, so it was probably later than most kids.

I admit this isn't good

I'm exhausted. Watching my Cubs fall to the Indians has been highly stressful. And I'm not stupid -- I know how hard it will be to come back from a 3-1 deficit.

But here's the thing: this season was magic. They got to the World Series for the first time since Harry Truman was in office.

So no matter what happens tonight, I'll always be grateful to these guys for 100+ wins and for getting us this far.

Saturday I had my regularly scheduled, once-every-two-years appointment with my gyne. While naturally I didn't leave with my test results, he told me everything in his jurisdiction looks normal.

He asked me what else was going on, healthwise. I told him. C. diff ... thinning hair ... fatigue ... vision change ... He and my GP are in the same practice so he has access to all my test results and saw that diabetes and thyroid disease were eliminated. He suggested that -- if the medicated shampoo doesn't work -- my GP and I discuss autoimmune diseases.

Last time I spoke to my GP, she thought these things were all unrelated. She suspects my fatigue is a result of sleep apnea and my hair loss is some sort of fungal infection.

We'll keep trying things her way for a while. But after January 1, I think I'm going to consult an endocrinologist. 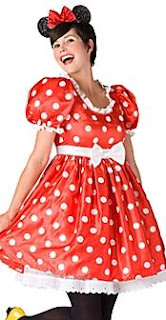 It's my favorite because I've still got the dress. I don't think it would be too hard to find Mousekaears. I drew my nose and whiskers with an eyebrow pencil.