It's taken me almost a week to detail this, but here we go.

John and I have been friends for decades and have been through many jobs, promotions, lay offs, love affairs and breakups together. We have buried parents and siblings. To borrow from "Two of Us," Paul's ode to friendship on Let It Be, John and I "have memories longer than the road that stretches on ahead." And now he's very ill.

He's had a callous on his foot for years. Yes, years! It began giving him grief and how did he handle it? No, he didn't go to a doctor. After all, John is a guy and that's not how he rolls. I 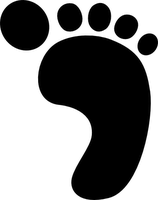 nstead he changed his stride. That was at least six months ago.

After Thanksgiving he began to notice a discharge. Even though he visited a doctor at that time because of his heart condition, he didn't mention the foot thing. As a matter of fact, he never even really looked at it himself. Because foot-related stuff creeps him out.

Around 12/13 he began to feel rotten. Suddenly he started running a fever and on 12/17, he went to Northwestern Hospital. Because of his bad ticker, they admitted him immediately. And there he stayed until Christmas night.

The callus had become infected. REALLY infected. An abscess had formed and then broken, sending toxins throughout his body. Because of his heart, controlling the infection was ever so important.Then there was the surgery. First the infected area was carved away, then a plastic surgeon was brought in to rebuild his foot so eventually he'll be able to walk normally.

He's home now, with an antibiotic drip and moving around with the aid of a walker. A nurse comes by two (or is it three?) times a week to change the dressing. He's on short-term disability, looking at another three or so weeks of recuperation. Then he may be forced to work from home.

But he sounds fine. Bored and weak, for sure, but no longer at death's door. He has good doctors, good insurance, and a job that doesn't require physical exertion. So I'm less worried about him than relieved. And slightly pissed. He is very important to me, and I really wish he'd take better care of himself. I'm afraid of losing him.
Posted by The Gal Herself at 1/05/2011 03:35:00 PM 7 comments: