1) Dean Martin asks the musical question, "How lucky can one guy be?" Tell us about a time when you got a lucky break. Last week. I was insanely busy with work, and while I was pounding away at the keyboard, my leg started to itch. I could not scratch the inside of my left knee enough. The skin was broken and so dry, it felt like tissue paper. It was over my varicose veins. Apparently this can be very serious because the veins are so close to the surface and if bleeding begins, it's hard to stop. Anyway, my skin didn't get that dry overnight. How did I not notice? I knew I should go to the dermatologist and get a prescription-strength cream, but I simply didn't have time because I was on deadline. So I started slathering ... Neosporin, hydrocortisone, body butter. Luckily my clumsy self-treatment did the trick. I must remember to moisturize that area of both legs every day from now on. You know, as I get older, things go wrong that never even occurred to me.

2) This song was introduced in the original Ocean's 11 movie. Have you seen it, or the remake and its sequels? I've seen both the first remake and the original. I most memorably watched the original with co-star Angie Dickinson, poolside at the 2019 TCM Film Festival.

3) All the Ocean's movies are about heists. Why do you suppose audiences enjoy watching caper films? I think it's the vicarious thrill of getting away with something. 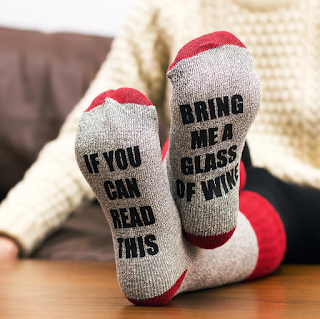 4) Dean was born in Steubenville, OH. Though he seldom returned to his hometown, he kept Steubenville in his thoughts, regularly donating toys to area children hospitalized over the holidays. Who received the last gift you gave? I sent these socks to my aunt/godmother for Mother's Day. She was so tickled! It's nice when a little thing can make someone so happy.
5) Dean was extremely claustrophobic and avoided elevators whenever possible -- and even when it wasn't. He was late for the first night of an engagement, even though he was staying at the hotel where he was performing, because he insisted on taking the stairs from his luxury suite to the showroom (18 flights). The hotel put him in a smaller, less prestigious room on a lower floor so he could more easily arrive on time for his own shows. Have you ever been stuck in an elevator? I've been working in skyscrapers since I was 18, so yes. It's really not a big deal. I've never been stuck more than 10 minutes.

6) He and Frank Sinatra were great friends, but they had their differences. For example, Frank loved to party and Dean hated it. One of Sinatra's favorite stories was about how Dean got bored with a party in his own home and went up to his bedroom to watch TV. When the guests didn't take his hint and leave, Dean made an anonymous noise complaint to the police, who came over and broke up the party. When it comes to parties, are you more like Frank or Dean? Am I throwing the party or attending it? As a guest, I'm Frank. As a hostess, I admire Dean's imaginative approach.

7) Dean Martin had a secret passion for comic books. He loved them, but was too embarrassed to buy them himself. What's your guilty pleasure? I love TV marathons. I can watch episode after episode of Law & Order, Magnum PI or Friends, even though I've seen them a million times.


8) In 1960, when this song was released, Princess Margaret married photographer Antony Armstrong-Jones. Their relationship began when he was commissioned to take her official portrait. Who took the most recent picture of you? The photographer at my niece's wedding.

9) Random question (Not really so random, considering Dean Martin's reputation): Do you have a hangover remedy to recommend? Back in my party girl days, I also drank a lot of water. I don't know that it really helped, but I did it anyway.