I haven't really heard from my oldest friend since the last time the police were at her apartment, to protect her and her belongings from her 21 year old son. At least I hope that's the last time she called the cops.

I have posted cute little Jib-Jab animations on her Facebook to cheer her up, and reiterated how much her attention and affection meant to me as I healed from surgery. I want her to know how much she means to me. But I haven't asked about her kids, or her work s 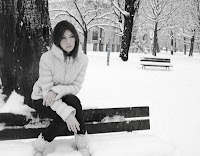 ituation. She never does what I recommend anyway, and it just wears away on me.

In theory we're going away together for my birthday next month. I believe that she wants to celebrate with me. I also don't believe it will happen.

I wish her life was different. I wish I could fix it for her. I am learning I cannot, and it leaves me sad and tired, with a soul that feels little frosty around the edges.

I continue to be distressed, depressed, and downright PISSED by the apathy I encounter about our troops returning from Iraq! Since when are returning heroes, coming home to their loved ones, not an occasion for joy?

On the one hand, I'm told this war isn't like Viet Nam or WWII. This time around, not everyone knows someone serving over there. It's not "that kind of war." No draft. Meaning that the kids who enlisted are, by and large, from a lower economic stratum, young people who don't have 4-year college degrees or defined career paths. That's a bullshit excuse. They are still Americans who volunteered to go overseas and fight and die for us.* At the very least, we owe them our attention.

On the other hand, I'm told we just don't have the wherewithal to give a shit because times here are tough. Oh, I don't need to be told that times here are tough. Anyone who reads this blog KNOWS how many layoffs I have endured, how many times I have felt the blade touch my own neck, how I have friends and members of my own family who struggle financially. As if that weren't enough, I work in a major metropolitan area, so I am asked every few blocks for spare change by those who have come upon hard times. I drop off donations to our local food pantry personally, rather than doing it through my church, because I don't ever want to forget that my neighbors continue to suffer.

But then, if that's your justification for yawning when you hear that the troops will be home by Christmas, you're still full of shit. Because so many of these young people enlisted because, like you, they were responding to hard times and could not find other work.


So I am making it my personal freaking CRUSADE to drum up enthusiasm for our troops and veterans!
At work I am continuing my collection for Operation Shoebox. I promise you that if you check out their List of Suggested Items that the troops need/want, you'll find things around your home that you don't even have to purchase. These good folks will then take your donations -- like used paperbacks or that unopened travel-sized shampoo that you took with you last time you stayed in a motel -- put them in shoeboxes and then send them off to our soldiers in Afghanistan.

For veterans coming home from Iraq, there are plenty of things you can do, as well. Here's a link from our Department of Veteran Affairs.

Look out! Between now and the end of the year I am going to post about this topic ALOT. Maybe it's because at heart I'm just a corny little patriot. Maybe it's because I realize how lucky I am that my all my test results came back benign. Maybe I'm still worried that those beautiful young people I flew alongside from O'Hare to Richmond (and Langley AFB) won't be coming home. Maybe it's because my oldest nephew has enlisted in the Navy and will be deployed somewhere by year's end ... Whatever the reason, my attention has been captured.

And if you don't feel like having your ear bent on this topic, feel free to just move along.


* I never believed in WMDs or going into Iraq, but that's hardly the point. They enlisted and they went where their Commander in Chief sent them. God bless them for that.
Posted by The Gal Herself at 10/23/2011 07:33:00 PM 2 comments: 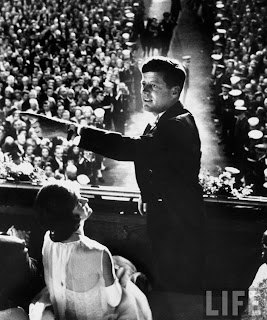 41. What is a quote that you love? Let's "build a world of peace where the weak are safe and the strong are just." JFK

42. Do you think of pure hate as something humanity created? No. Just yesterday I was at the vet and heard about an old dog who was ferociously set upon by two younger, unleashed canines. (The much-loved old dog is going to be OK after surgery.)

44. Do you ever at times see the world in black and white? Yes.

45. Have you ever thought that cell phones are too obtrusive? YES!

46. In your life, where do you think the rainbow will end? Right now, the end of my personal rainbow is to enjoy good health and have my stamina back.

47. What is something that you never want to do again? Waste too much time on the wrong man.

48.When was the first time you realized the world was small? I'm not sure I realize it yet. When I think of all the places I've been where I want to return, and all the ones I still want to visit, the United States alone seems vast, much less the world.

49. How you spend your time contemplating life’s mysteries? Usually they wash over me in the shower.

50. Ever discuss your political beliefs with people? Oh, try and stop me!

care about the environment? Yes.

52. What’s your motto for life? East is east and west is west and if you take cranberries and stew them like applesauce they taste much more like prunes than rhubarb will -- Groucho Marx

53. Is progress destroying the beauty of the world? No.

54. Do you believe there is life somewhere else in the universe? Intellectually, yes. Emotionally, no.

56. Do you believe everything has a purpose? Yes.

58. Could you kill anyone in defense of self or loved ones? I don't know.

60. Does love conquer all? If not all, then at the very least MOST.

62. Is world peace impossible? I don't know, but it's certainly worth working toward.

64.What do you think is the purpose of your life? To be, as Wilbur eulogized Charlotte, "a true friend and a good writer."