1) In this song, Ariana Grande thanks her former boyfriends for what they taught her about love, life, patience and pain. Do you believe you have learned more from your successes, or your mistakes? My successes. I'm afraid I don't learn from my mistakes because I seem to make the same ones repeatedly.
2) One of the young men mentioned in the song is Pete Davidson, a cast member of Saturday Night Live. SNL has been on for more than 45 years now. Who is your all-time favorite cast member? Chicago's very own Bill Murray. For obvious reasons.

3) Thinking of funny people ... As you can see from the video, Ariana performed "Thank U, Next" on Ellen Degeneres' talk show. Ellen makes people laugh every afternoon. Who in your life can you always count on to make you laugh or smile? My oldest friend.
4) It looks like Ariana Grande's personal romantic saga will have a happy ending because at Christmastime, she announced her engagement. Do you know anyone who is getting married in 2021? My oldest friend's son is getting married in the spring.

5) Ariana loves Harry Potter and named her dogs Snape, Lily and Sirius Black after characters in the J.K. Rowling books. Are you a Harry Potter fan? Nope.
6) She loves board games, especially Monopoly. Sam isn't crazy about Monopoly because it takes so long. How about you? Are you a Monopoly fan? Nope.
7) In 2018, the year this song was released, Toys R Us closed all its stores and went out of business. Who received the last toy you purchased? What was it? My older niece had a baby boy in 2020. When I sent the baby gift, I included a doll for her older daughter, so Big Sister wouldn't feel overlooked. The doll has its own bathing suit, towel and inflatable bath toy. It was quite a hit, though she sleeps with it instead of taking it into the tub with her.

9) Random question: Are you more likely to shed a tear at a wedding or during a movie? A movie.

Do you know Letterboxd? It's like Goodreads, but for movies. You can log each movie you watched, rate it, note where/why you viewed it. Like Goodreads, it tabulates your personal year-end stats.

•  My favorites were (no surprise) The Way We Were and Casablanca. I predict they will be my favorites in 2021, too.

•  The one that I appreciated most that also got a high rating from the rest of the Letterboxd community was Joker.

•  The one that I liked less than the rest of the Letterboxd community was Vertigo.

And here's my favorite stat. My most-watched stars of 2020 were: 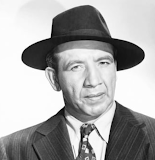 MIKE MAZURKI? Never once in 2020 did I curl up, grab the remote and think, "I need me some Mike Mazurki." And yet I watched more Mike Mazurki movies than I did Elvis, or Judy Garland, or Katharine Hepburn.

So, Mike Mazurki, let me shine a spotlight on your career. Because of his 6'5 frame, square face and husky voice, he was almost always cast as a gangster or a bully. When his career as a professional wrestler tanked, he tried his hand at acting. In addition to movies from the 40s and 50s, he played his share of bad guys on TV shows in the 60s and 70s -- everything from Mr. Ed to Gunsmoke. Never a star, but always a presence, he worked regularly for more than 50 years. He never actually retired and was still appearing on TV and in music videos when he died of heart failure in 1990. Friends and coworkers recall that he was nothing like the characters he played, that he always had a book in his hand and was very witty in conversation.

As for me, thanks for being a bright spot in an otherwise shitty 2020, Mike Mazurki!