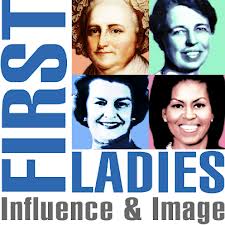 I love hearing about the First Ladies! It's such a fascinating position, a historical Rorschach Test. Because the role is undefined, the way each lady performs it says a lot about her, and the times.

Everybody has an opinion about everything she does. People with way too much time on their hands actually organized and sent combs to Jackie Kennedy because they didn't like her "French" hairstyles. Nancy Reagan spent too much on china. And I remember being in a sandwich shop in downstate Bloomington, IL. Fox News was on and they were castigating Michelle Obama because she said parents shouldn't have to take the subway or a bus, just to buy fresh fruit for their families. "Why shouldn't they?" the commentators were demanding. As if helping parents provide good nutrition for children is somehow controversial. Sheesh!

And yet even while we're relentlessly picking on these women, we're also so proud of them. JBKO is credited with pioneering today's "soft" diplomacy -- while her husband and DeGaulle were going at it tooth and nail about arms and aid, she willfully and single handedly convinced the French Minister of Cultural Affairs to bring the Mona Lisa to America. That breathy-voiced girl not only enabled millions of American school children see a classic work of art, she helped lower the temperature of the negotiations between two countries. I still recall what a big deal it was when Pat Nixon bravely toured a combat zone. And, speaking of courage, who can forget Hilary Clinton speaking out for Chinese women -- in China?

And there are the fascinating ladies who served before my time. Abigail Adams wrote the most fabulous letters, not only to the husband she referred to as "dear friend" (I think that's so romantic) but to Thomas Jefferson and other influential men of the time. I love how they admired her intellect. And my poor homegirl, Mary Lincoln. Treated cruelly first by fate, then by family and finally by history.

Because I love learning about them, I'm thrilled about the series CSpan is debuting on President's Day. I'm anticipating this with the same excitement other (less geeky) folks reserve for The Super Bowl.