A TT Rewind from Five Years Ago ...

Here are thirteen shows
THE GAL HERSELF
is happy to drop everything and watch again,
and again, and again.

1) Law & Order. You guys had me at, "In the criminal justice system, the people are represented by two separate yet equally important groups: the police who investigate crime and the district attorneys who prosecute the offenders. These are their stories."

2) Friends. Phoebe referring to Old Yeller as "a puppy snuff film." Chandler announcing that, "Joey's tailor is a very bad man!" Every episode has a memorable moment.

3) The Dick Van Dyke Show. "Oh, Rob …" How I wished my parents were as glamorous as Rob and Laura! I especially enjoyed the episodes where they sang songs like "Mountain Greenery" at their cool dinner parties. My mom and dad played pinochle with my friend's parents at the dining room table. Not quite the same, is it?

4) The Andy Griffith Show. But only the black and white ones with Barney.

5) The Brady Bunch. I have no idea why. It's achingly stupid. Yet I can't turn away.

6) I Love Lucy. I do. Love Lucy, I mean. Plus, I believe the Riccardo's apartment accounts for my fondness for exposed brick.

8) That Girl. The clothes. The hair. The handbags. The romance of New York City.

9) Sex & the City. The clothes. The hair. The handbags. The romance of New York City.

10) Magnum PI. Thomas is a rakish charmer and a much better detective than Higgins (appears) to give him credit for. The cast interacts beautifully, as though they really do have a history that reaches back to Nam.

11) M*A*S*H*. Anarchy and humanity and a ton of puns, all in a half hour comedy. It doesn't get any better than this.

12) Moonlighting. After Hawkeye left Korea, network TV was left with a dearth of smart ass heroes. Then David Addison Raybanned and smirked his way across our screens. Watching the DVDs, I realize that Cybill Shepard was more charming than I recalled.

13) Golden Girls. Wouldn't it be comforting to know that as we grow older we'll also grow warmer and funnier and we'll remain sexually active? 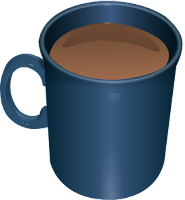 My mother loves coffee with milk, and that's what she got to have today. Along with chicken broth. Tomorrow her gastroenterologist is adding even more foods to her list. (Though I believe the list consists of stuff like tea, saltines and jello. But still!)

She's sooooo much better than she was over the weekend. I don't know why my sister painted our mom's condition in such a gloomy light. I'm sure I could have taken off for Williamsburg without incident.

But what's done is done. I'll book the trip again soon (maybe the week of the 15th). And it'll probably be better to go then, because I'll know beyond a doubt that she's better. By then she should even be home. I won't get my charming little house again. but oh, well.

Staying there couldn't possibly be as thrilling as watching my mom drink coffee with milk!

I want to be looking back on this. Last night, when I went to sleep -- or, more accurately, was unable to sleep and watched a documentary on The Last Days of Elvis -- I was worried sick about my mother. I had made peace with canceling my vacation, but was sad because doing so felt like I was giving up on her, like I didn't have faith that she would pull through. I even called my friend from Key West, who graciously and kindly promised he would fly up and hold my hand through her funeral.

After all, my kid sister just told me last night there were "surgeons at the ready," and my mom is an old lady.

Well, this afternoon I called to check on my mother and she sounds so much better! She was very upset that I canceled my trip in preparation for her surgery because, well, there have been "surgeons at the ready" since she was admitted last Friday and every day that goes by makes surgery less likely, not more.

So now I am relieved, tired, and a little weepy. I want my mother home ... and if not home, then at least out of ICU. I want us to look back on how silly it was that I canceled my vacation for nothing. I want all this to just be a memory.