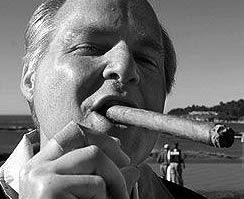 Let's see now ... Rush Limbaugh is a recovering drug addict who has been divorced three times. He's fat and ugly and smokes cigars. And here are just some of his more sensitive comments about women:

Of the Rielle/John & Elizabeth Edwards triangle: "It just seems to me that John Edwards might be attracted to a woman whose mouth did something other than talk."

On Hillary Clinton during her Presidential campaign: "Meanwhile, Mrs. Clinton is where? She's in the Northeast. She is surrounded by her good old, white female, new castrati male base."

"I prefer to call the most obnoxious feminists what they really are: feminazis. I often use it to describe women who are obsessed with perpetuating a modern-day holocaust: abortion."

The compassionate gentleman who made these comments is the one that is proudly, brazenly beating his chest and proclaiming himself a force of nature, someone who deserves to debate President Obama.

Because he's so loved by his ditto-heads, I don't think Rush Limbaugh appreciates how desperately repellent he is to many Americans. Or maybe he doesn't care. Maybe he's just a very clever entertainer who understands that all this publicity about him being "the head of the Republican Party" is very good for his ratings among his core of true believers.

It's wonderful for Barack Obama. He doesn't have to demonize Rush -- Rush makes himself unlikable every time he turns his mic on. The people who spend their afternoons with Rush Limbaugh would never vote for Barack Obama anyway. There are those who are in the center, or who are undecided as to whether or not they support the President's policies. If most of them believes that Rush Limbaugh personifies the President's political opponents, that's very good news for the President.
Posted by The Gal Herself at 3/05/2009 06:15:00 PM 6 comments: Links to this post