That bit of business with the hat came in handy 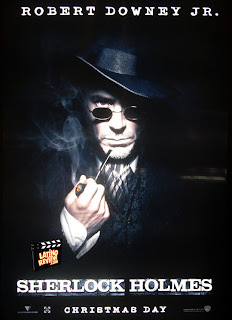 I loved Robert Downey in Sherlock Holmes. I loved his performance more than I liked the rest of this messy, violent movie.*

Downey's interplay with Jude Law is a delight. It reminded me of Newman/Redford, and that is high praise indeed from this old Gal. He's astonishingly lithe in the action sequences, and I especially enjoyed the way he was forever handling hats because it recalled how Downey played with the black bowler in his Oscar-nominated turn as Chaplin.

Robert Downey, Jr. also sounds just like an old boyfriend of mine. Which I find sexy.

*I suspect that the "messy, violent" aspects were intentional, that the resulting anachronism is part of Guy Ritchie's signature style. Which is fine. I just don't care for it.
Posted by The Gal Herself at 1/22/2010 03:23:00 AM 3 comments: