But he so clearly wanted to be petted!

The trains were messed up this evening -- there was a fire near the tracks somewhere and all the trains were delayed. Anyway, we were all on the platform for a long time, waiting. And there was this adorable yellow lab, there assisting a woman with a cane.

He was either new to his job or really bored because he kept looking longingly at everyone around him. He wanted to sniff! He wanted to sniff soooo badly! And you could tell that a good, hard head rub would be heaven.

I resisted, but it was hard.

Continuing to touch the better angels of my nature 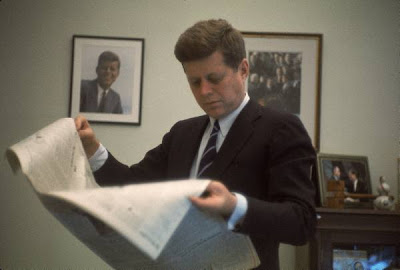 There's a fabulous, off-the-cuff moment in one of JFK's televised press conferences. Asked if he was happy in his current position, ie leader of the free world, he replied, that he was indeed when you consider, "the ancient Greek definition of happiness was the full use of your powers along lines of excellence."

After President George W. Bush somehow made intellectualism a negative thing, our politicians seem to feel that showing they are educated, that they have curiosity about our world and its history is bad. (Makes them, in Rick Santorum's famous phrase, "snobs.") I think it's sad that, instead of being proud that he's fluent in French, Mitt Romney refuses to speak it on camera. President Kennedy reveled in other cultures. He also believed that history, our own and that of other countries, "can teach, offer hope, provide inspiration." 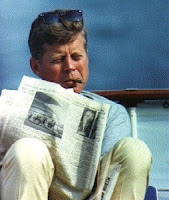 In public addresses, he often drew from the Greeks and the Chinese ("When written in Chinese, the word 'crisis' is two characters; one represents danger and the other represents opportunity."). One of his favorite stories, an oft-repeated metaphor for how to use time and view the future, was of a French Army General from the 1920s. "Marshall Lyautey once asked his gardener to plant a tree. The gardener objected that the tree was slow growing and would not reach maturity for 100 years. The Marshall replied, 'In that case, there is no time to lose. Plant it this afternoon!'"

These references were not scripted. They came from his voracious personal reading, they reflected what captured his imagination and touched his heart.

Today, on the 95th anniversary of his birth, I want to celebrate what it is about him that captures my imagination and continues to touch my heart -- his optimism, his willingness to experiment and innovate, most of all, his love of words and ideas and history. When JFK was in the Oval Office, what is now considered "elitist" was glamorous. One of my favorite moments in his widow's Historic Conversations comes when she describes his reading. He spent every spare moment reading, and he kept a book open and within sight even when he was shaving or tying his tie.


"Let us think of education as the means of developing our greatest abilities,
because in each of us there is a private hope and dream which, fulfilled,
can be translated into benefit for everyone and greater strength for our nation."