A night of local color

My best friend is a foodie, so we went to a very nice restaurant in the cool, foodie part of town. The service was excellent and the meal was almost as tasty as it was pretty. We were having a wonderful time ... and then he came back from the restroom.

"Good thing all I had to do is pee," said he. Since I know nothing of mens rooms, and since he is not known to share details of his output, I was confused by this comment. He went on to explain that the mens room stall was being used by a heterosexual couple who were ... coupling. He said the woman -- who was wearing tooled boots -- was rather pretty bossy.

As we were discussing it, the busboy came by and apologized for the mens room as he refilled our water glasses. This is not the kind of place where things like this frequently occur.

To tweak my bud, whose oldest girl is in 8th grade, I said, "You know that woman is someone's daughter."

"No, Gal," he replied, watching the couple emerge from the restroom area, "she's someone's mother." She was easily 45, short and stout. He also had 40 in his rear view mirror and sported a droopy mustache. The last couple you'd imagine to be swept away by passion into semi-public sex in a bathroom stall.

Then I caught a cab home. The most amazing cab I have ever seen. Turns out it's something of a Chicago legend! Here's a video. Ride along with me, won't you?

Which of your Christmas gifts is traveling farthest? A Better Homes & Gardens decorating book for my cousin Rose is about to cover 1,184 miles to reach Pinellas Park, FL. I'm mailing it this afternoon.
Posted by The Gal Herself at 12/16/2010 12:33:00 PM 2 comments:

Sometimes he makes me want to cry 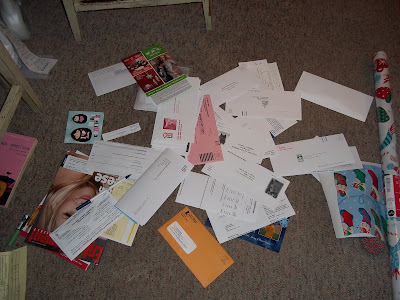 I know just what to do with him 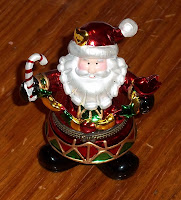 My best friend gave me a digital frame for my birthday and, to get me into the Christmas spirit, a bag full of holiday gifties -- candy dish and chocolates and scented candles and this gentleman. I know HE thinks the frame was most important gift, but this sturdy yet intricately painted Santa is my favorite. I know just what to do with Saint Nick. If you look closely, you can see my grandmother's ring nestled in the belly that shakes like a bowl full of jelly.

We had a great dinner and my friend loved the framed poster I gave him. He really isn't enjoying his job but I enjoyed hearing about his daughters (he's such a good dad) and this morning I am happy. 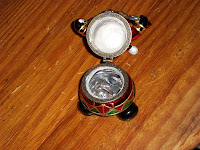