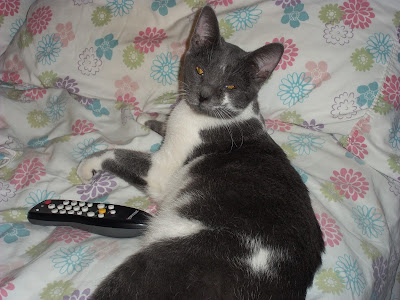 My Connie really is such a sweet cat. Spirited and affectionate. And that's what makes this news so sad and unfair.

Her first year, 2013, was a difficult one. She began her life with a hoarder who kept at least 9 cats in a little apartment. When she ended up at the shelter, she was emaciated and pregnant with a stillborn litter. She had terrible breath because of bloody gums and was suffering from an upper respiratory infection that manifested itself in chronically runny eyes. I knew her history when I adopted her. I realized she was "special needs," that because of her eye trouble she'd need to be dosed regularly with Lysine.

What I didn't know then was that she'd already been exposed to FIP, an incurable virus that will someday take her life. I just found that out Monday afternoon.

My dear old tomcat Joey had -- among many other health problems -- a rather rare virus that sapped his strength and contributed to his passing. It weakened him as his old body tried to battle late-stage kidney disease. Because he shared a water bowl and litter box with Connie and Reynaldo, I was worried that he may have passed this virus onto them. My vet said it was unlikely but I wanted to be sure. So last weekend, when I took Connie to the vet for her annual vaccines, I asked for a full blood panel.

The vet was right. She didn't catch anything from old Joe. But she does have FIP, which is different, and worse.

She's fine now. Her heart and lungs sounded good to the vet. Her eyes are clear. She's lively and sociable and her appetite is good. The vet advises me that, with the proper care, she could lead a normal life. What will predictably happen is that the opportunistic FIP virus will one day in the future turn a simple cold into something fatal.

Connie deserves a good life. The way it began -- in crowding, in squalor -- is not her fault. I'm going to see to it she gets the best possible diet and regular vet care and lots of affection. I don't know how many years she has (the vet says 10 is not out of the question), but I'm going to give her the best I can. I love her and take my responsibility to her very seriously.

PS Later this month, when Rey goes in for his vaccines, we'll learn whether he's picked up a virus from either Joey or Connie. The vet says it's unlikely, but we've got to find out.

The soundtrack of my life

What if your life was a movie? What music would accompany the action?

Fight or Flight: Don't Rain on My Parade -- Barbra Streisand
Learning a Lesson: Friends in Low Places -- Garth Brooks
Friends: Part of Me, Part of You -- Glenn Frey
Deep Thought: That's Life -- Frank Sinatra
Flashback: Moonlighting -- Al Jarreau
When I Was Young: Come on Down to My Boat Baby -- Every Mother's Son
When I Get Older: When I'm 64 -- The Beatles Can't find a good version on YouTube
Happy Dance:  September -- Earth Wind and Fire
When I'm Feeling Down: Stoney End -- Barbra Streisand
On Top of the World: Brand New Me -- Dusty Springfield
Closing Scene:  Tears Dry on Their Own -- Amy Winehouse


I realize this list reflects my advanced years. But I enjoyed this exercise enormously. Thanks for sharing it, Kwizgiver!