He's planted a flag on a small corner of my heart

Over the weekend, my President had harsher words for SNL, who teased him, and Fox, who suspended Judge Jeanine, than for White Supremacists.

My President, who wraps himself literally in the flag and brags about his support for veterans, made fun yet again of a dead war hero. John McCain served voluntarily in Vietnam, and President Trump had bone spurs.

And there are "Christians" across the blogosphere who insist that this President is their guy.

It all makes me a little sick to think about. 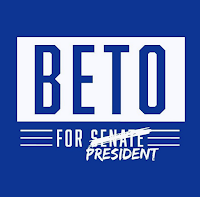 On the other hand, Beto O'Rourke is asking us to "demonstrate our resolve, our creativity and our courage." He promises his campaign will be positive. A campaign that includes all of us.

I'm a little in love with Beto O'Rourke.

Oh, it's early yet. I don't know where Beto is on many specifics, and when I find out, I may not love him at all anymore.

I've always gotten a kick out of Joe Biden, and believe he is an exceptionally good man. It would really hurt me to vote against him.

But then, President Trump dismissed Beto because of the way he uses his hands* and I felt the need to leap to the Congressman's defense.

My politically astute and involved nephew is back with Bernie, but was not surprised by my fascination with Beto. "He reminds you of Obama, doesn't he?"

"Well, yeah," I lied. But my nephew, a college freshman, was not yet born the last time I felt this way about a candidate. After 12 years of Reagan-Bush (or, as Don Henley referred to them, "Those tired old men that we elected King"), I yearned to hear from someone to connect to emotionally, a candidate who "felt our pain." Someone who, as Abraham Lincoln said, "touched the better angels of our nature."

I ache for that now. I want a leader who won't fuel our anger about what's gone in the past, but instead who encourages us: "Don't stop thinking about tomorrow."

Intellect is important. But so are imagination and charisma.

And how can you not admire Joe Biden's courage, optimism and common touch?

In 2020, winning is literally more important than ever.

*Hands that are bigger than Trump's, I'm sure.