For the 38th time

Last night John and I celebrated his birthday. By my rough calculation, this is the 38th time we've lifted our glasses and toasted the anniversary of his arrival on earth.

Today he turns 65. A landmark birthday. So in putting together his gift, I concentrated on two things: Medicare and Covid19. His gift bag included:

•  A jokey birthday card about generic medications
•  A gift card good at his pharmacy of choice, CVS
•  Trader Joe's top-of-the-line hand sanitizer
•  A Diana Ross and the Supremes mask
•  A giant roll of toilet paper 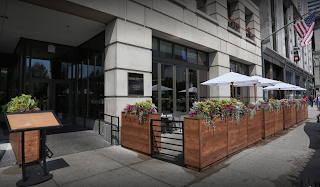 We also had a great dinner at Remington's on Michigan Avenue. Amazingly, he'd never been! (John tends to know all the good spots before I do.) He had the creamed spinach and crab cakes, I had their big-ass burger and fries. He drank Pinot Grigio, and I had a margarita. We talked for hours about everything ... from Anthony Fauci to Ruta Lee. Our conversations have always been ridiculously random. One of our bonds is that we have the same pop culture reference points.

We each were serious for a moment. Many of his immediate circle are choosing to stay home this weekend because of Covid19. It meant a lot to him that I set this up, this year, instead of just sending a card. He was quite sentimental about it.

And I thanked him for always being so comfortable discussing race with me. I'd had friends of color before John, but they weren't as patient or at ease about answering my questions and introducing me to their life experiences. Over the decades, John's and my conversations have at times been heated (in real time, he saw the OJ trial as the system confronting a black man it couldn't bring down; I saw it as empowered men disposing of an inconvenient woman*) but they have all been respectful and illuminating.

My fifty-something kid sister recently proclaimed that now she understands what white privilege means. I learned that lesson decades ago, from hanging around with a tall black man and seeing how differently he was treated -- on trains, in stores, trying to hail cabs -- than I was. My friend John has educated me and made me a better person, a better Christian and a better American. I'm not sure that if it hadn't been for George Floyd, I ever would have thanked him.

The celebration cost more than it should have, though. I intended to take the commuter train to/from the Loop last night. I already have a 10-ride ticket, so my out of pocket would have been nothing. But because of Covid19 and everyone working from home, the commuter trains are especially erratic and the one I was waiting for last night simply didn't show up. Didn't. Show. Up. AARGH! So that was $60 in Ubers that I hadn't intended on spending.

*He's since changed his mind. I haven't changed mine.

Meanwhile, back at the ranch

He also says he looks like the Lone Ranger in his black Covid19 mask.

I don't know about you, but I'm voting for the man who understands which part of his face the mask is supposed to cover.