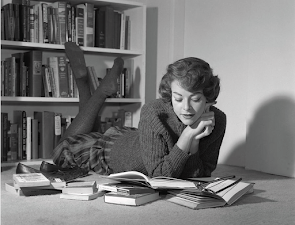 1. What are you currently reading? Summer Secrets by Jane Green. Do you feel like winter is just hanging on too long? I do! So when the library recommended this Jane Green book to me, I snapped at it. Summer! But be warned, this is no light beach read.

It's a novel about Cat, a 30-something divorcee and recovering alcoholic. It's about family secrets and the impact yesterday has on today. It unfolds slowly, drawing you in. So far, I'm intrigued.

2. What are you currently reading? Jackie: Her Transformation from First Lady to Jackie O by Paul Brandus. This book concentrates on the five years between JFK's assassination in Dallas and Aristotle Onassis' wedding to Kennedy's widow, the most famous woman in the world, Jackie. It's about how a young mother claws her way out of depression while enduring the scrutiny of just about everyone on the planet. It's an interesting spin on an oft-told tale.

Unfortunately, I don't think it really delivers. I'm not sorry I read it. Jackie's tale is fascinating: part Jane Austen, part Jackie Collins, and all true. But there's precious little in this book that's new or particularly insightful. Maybe I've just read too much about Jackie, but there wasn't much here that wasn't recycled.

The Smartest Person in the Room

This clip from Broadcast News is me and my new boss, Marilyn. We've never had this conversation, per se. But Friday we came close.

I came up with a pair of major promotional initiatives for my client. I thought them through completely. My write ups were detailed. My boss said she didn't like my "handles" (the snappy titles) but she thought the tactics were sound.

She said she would take them to the account/strategy teams herself. Days later, when I saw the ideas after their input, I barely recognized them. New tech innovations were added that, I felt, obscured my insight. I wasn't pissed, just confused. What happened at that meeting? My boss told me she thought my ideas were valid, and now somehow they were transformed into something bigger but not (in my humble opinion) better. I know my client. I get my client. Aside from the occasional request for a Tik Tok video, they are old school. Their brand is authenticity, not innovation.

What's more, my boss told me the strategy team was going to "take it from here." They were going to take over the actual writing, creating a white paper to present to upper management, and then (with management approval) the client.

Since I'm the writer, having the strategy team take this over was insulting, I suppose. But we were on deadline, and I didn't feel like working evenings. I had other work to do (the car client reared its head and I had to come up with 1000 words on the meaning of dashboard indicator lights).  So what the hell. I no longer understood "my" ideas anymore anyway. If I was this far off, this far away from the mark, I shouldn't work on them.

"Not long at all," I said. "That's what I wrote originally."

Yes, the ideas I sent her nearly a week ago were almost exactly what upper management thought my client would want. They were right before she and the account and strategy teams "retooled" them.

I resent them in an email titled, "Back to the future." Then I logged off for the weekend.

Monday morning, my boss very graciously did a mea culpa and called me "clairvoyant" for being able to anticipate how this would go. I was gratified to see much of my original copy is now in the deck. Literally. ("Confronted by a dizzying array of options, consumers can feel paralyzed ...")

But there's something very wrong with the team that's currently in place if I'm the smartest person in the room. Jane Craig was right. Sometimes it's awful to know you know best. 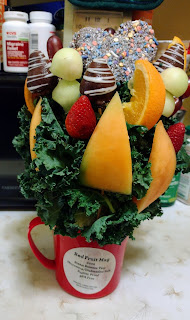 Last week was my work anniversary. 18 years at the same agency. That's unheard of! I never meant to be here this long. This is where my career became my job, where I stopped caring about the title or the next rung on the ladder. I've known for a while that this would be the last stop, and I'm fine with that.

There's a certain ennui to it all. Deja done that.

Which is why this meant so much to me. Rita, my new-ish (4 months) writer sent me this fruit-and-chocolate bouquet to celebrate. About $50 out of her own pocket. She wished me a happy work anniversary and then closed with, "Thank you for taking me under your wing. Forever grateful."

I'm prouder of what she wrote than I am of anything I've written in a while.