Which is why I am shocked (!) to report that she's clearly a woman of easy virtue. Through my Bonanza obsession I've discovered that she romanced the nearly the entire Cartwright clan.


I do wonder how she avoided a lip lock with Little Joe, the swain of the Ponderosa. But that might be just as well, since Little Joe's women tended to die at the :58 mark.

I also found a completely charming interview with Hartley where she said she enjoyed working on the show because the four main actors were so irreverent ("they were all so dirty!"). She was amused that after her second appearance the producer got a letter from an irate fan, wondering how Ben didn't recognize the girl who tried to seduce him as the teacher who'd made eyes at Adam just five years before. Astonishing, really, when you consider that this was before streaming, DVDs, VHS or even Beta. Back in the day, Bonanza had a really slavish fan base.

*I saw her on stage in the touring company of Copenhagen (2001) and she was quite good.

I didn't mean to make him cry

People who knew me in the 1980s and 1990s have delighted in the similarities between the young Gal and Peggy Olsen of Mad Men. I see it, too, of course. We both:

I was a creative director until I quit and decided to work my way down the corporate ladder. I am proud to say that was my choice. I have never been laid off -- rare in this industry -- though God knows there's still time. I have won a Clio, an Echo and a Tempo.

I have found my career both exhilarating and disappointing, both more and less than I dreamed it would be.

And, I suppose, I had a Don Draper. He was not breathtakingly handsome (though he's always had a wonderful head of hair) and, frankly, I ended up surpassing him.

But that's only because he taught me.

I'd been in the industry a decade by then, still painfully aware of my lack of formal training. I was operating on instinct, not craft. For some reason, my bosses to that point were reluctant to give me any real help with my writing. For example, I had a job for a major catalog house for five years and at the end of my tenure still didn't know what made one page "better" than another. I was rather successful as a writer for a major haircare company, doing product packaging, but any guidance I got was from R&D and the marketing department, not the creative director.

All my supervisors used to tell me was which ass to kiss. I also got stern warnings about my smart mouth and party girl proclivities. But, no matter how I worded the questions, I didn't get any help about my writing. Somehow, perhaps by the dint of my stubbornness, I still moved along and got better jobs.

Then I met Ed. He taught me craft. The rules of the road. The tried-and-true tricks. I had another very good boss a few years later (my friend Barb) but he was the first supervisor to bother, to pay attention, to hear what I was asking and to give me what I needed, and I've always been enormously grateful.

He's also one who never tired of pointing out the Gal/Peggy similarities in Mad Men. So when the last episode aired, I posted this to Facebook: 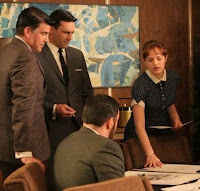 It isn't just that Don is hot (though God knows he is), it's that he was such a careful and successful mentor to Peggy. When I first made the quantum leap from secretary to copywriter, all my bosses discussed with me was office politics. I was ten years in before a Creative Director finally gave me craft to augment my instincts. If I haven't said it already: THANK YOU, ED.

Ed, who has been unemployed for so long now that people assume he's retired, messaged back that my post made him cry. He's very proud of my success and so pleased that I have been so "generous" in giving him credit.

Sometimes social media is a good thing. Ed's family has been beset by setbacks: he lost his job, he faced down cancer, his daughter was stricken by leukemia and now, while in remission, has embarked on a very high risk pregnancy.

I'm glad I was able to give him such a public shout out. I'm glad it meant to much to him.