Google her and you'll find lurid headlines: "Sister Says Natalie Wood Murdered by Robert Wagner" and "Why Natalie Wood's Death Remains a Mystery." This reduces her to her final hours, minimizing her hard-earned place in film history.

And Natalie Wood was once one of the hardest working actresses in Hollywood! Here are just some of Nat's stunning stats:

•  The year she turned 9, she made three films, including two classics (The Ghost and Mrs. Muir and Miracle on 34th Street)

•  Between 1953 and 1956, she was a regular on three early TV series (Mayor of the Town, The Pride of the Family and Kings Row) while also filming big screen classics like The Searchers and Rebel without a Cause

And there are her Oscar nominations. Three by age 25.
The only other actress to achieve that stat, before or since, was Teresa Wright in the 1940s.

Let's take a closer look at those three roles and celebrate Natalie Wood for the career she built.

•  Best Supporting Actress: Rebel without a Cause (1955). She's Judy, the high school siren. Judy "goes with the kids," wears tight sweaters, smokes and breaks curfew. In fact, when the audience first meets Judy, she's in the police station. But she's not a bad girl, just misunderstood. As she moves from childhood to a troubled adolescence, she acts out. She attracts attention from the boys, especially Jim (James Dean) and Buzz (Corey Anderson), and the results are tragic.

Wood showed her range as she ping-ponged between false bravado and romantic yearning. When she's "with the kids," she's loud and casually cruel. Alone with Jim, she's tender and tentative. "I love someone," she says, her voice and eyes filled with awe. "All my life I've been looking for someone to love me, and I love somebody."

She didn't win the Oscar that night. In true Judy fashion, she was all attitude as she feigned disappointment for photographers. At the time, she told friends she didn't care about the statuette. A child of Hollywood, the Oscars just felt like prom night to her. Instead, it was the nomination -- the promise of the meatier roles it represented -- that mattered.


•  Best Actress: Splendor in the Grass (1961).  The movie begins in 1928, where everything in Bud's and Deenie's world is on the cusp. They are high school seniors, impatient to graduate and start on their adult (and sexual) lives. The nation doesn't know it, but America is on the verge of the Depression.

Warren Beatty is Bud, star athlete. Natalie is Deenie, eager to please everyone. She works for good marks from her teachers. She wants to be the dutiful "good" girl her parents expect. And she longs to please Bud in every way possible, but if they go all the way, she won't be "good" anymore. The stress of living up to every one's expectations causes Deenie to lose herself, and briefly, her mind.

Deenie is achingly sensitive, like a human tuning fork. She's smart, too. Her best scenes are the quiet ones at the very end, when Deenie understands what happened to her, and why. You may wonder what's next for Deenie, but you're confident that she will be OK. Maybe not happy -- not in the way her schoolgirl self defined happiness. After all, "Nothing can bring back the hour of splendor in the grass ...". But Deenie is now strong and self aware ("We will grieve not, rather find strength in what remains behind ..."). 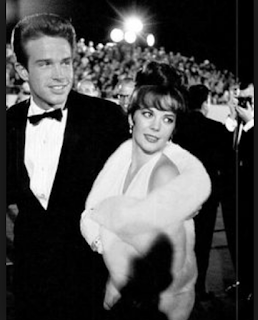 When Natalie Wood attended the Oscars in April, 1962, she was as big a star as she would ever be. She caused a sensation on the arm of her costar and lover, Warren Beatty, at a time when their affair had Natalie competing for magazine covers with Jackie and Liz. In addition to Splendor in the Grass, she starred in West Side Story, which would be the evening's big winner. Gypsy was already in the can and would be released before Christmas.

She didn't win that night, either. But it was an important milestone in her career. She was powerful, having earned director and costar approval.

•  Best Actress: Love with the Proper Stranger (1964).  Imagine kohl-eyed, glamorous Natalie as a clerk at Macy's. She pulls it off in her third and final Oscar-nominated role.

Angie lives in a crowded apartment with her mother and three brothers. They pressure Angie to marry the man chosen for her (Tom Bosley). Anthony is kind and shy and would undoubtedly be good to her, but she doesn't love him. Angie believes that both she and Anthony deserve romance, "bells and banjos."

Angie has a one-night rebellion with a musician named Rocky (Steve McQueen). She discovers she's pregnant and seeks him out to help her arrange an (illegal) abortion. This is no easy predicament for an Italian Catholic girl to find herself in, and it goes from painful to humiliating when she learns Rocky doesn't even remember her.

Natalie captures the desperation of a young woman with no privacy, no freedom. She is also sweet and tender (especially in her scenes with Bosley). She wants a husband and a baby, but she refuses to settle. It's important to note that she doesn't want either man to settle, either. She won't trap Rocky into a marriage he doesn't want, and she refuses to keep Anthony from a wife who will truly love him. And so we root for Angie to get her happy ending with "bells and banjos." 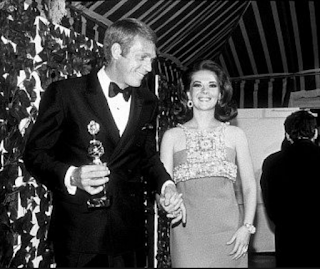 I could find no photos of Natalie at the 36th Academy Awards ceremony and can't confirm she attended. (But I bet she was there; Natalie was always "a company girl.") Here she is with McQueen at the Golden Globes. Both were nominated, but neither won, so I can't tell you whose Globe McQueen is holding.

This final Oscar nomination marked the beginning of the end of Natalie's superstar days. She worked crazy hard during this period -- five movies in two years -- but none of these big-budget films made much money.

She took time off to have two daughters. Then she returned to work, because Natalie Wood got great satisfaction from acting. She went where the roles were, and found success on the small screen. She was especially good as the struggling but irreverent housewife in The Cracker Factory and won a Golden Globe for her portrayal of Karen Holmes in the From Here to Eternity mini-series (both in 1979). At the time of her death, she was working on the feature film Brainstorm and enthusiastic about making her stage debut as Anastasia in Los Angeles.

And so, when I remember Natalie Wood,
she's not a victim.
She's a dedicated actress. 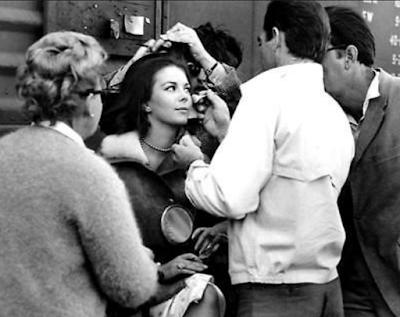 Want more Oscar? Visit Paula's Cinema Club, Once Upon a Screen and Outspoken and Freckled. 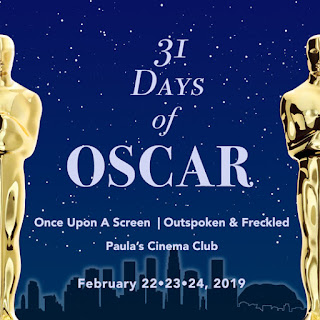