Happy birthday to me (part 7) 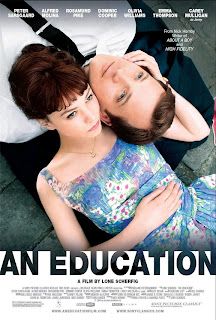 My dear old friend, John, and I went first to the movies and then to dinner. It was a quiet birthday celebration, at least by our standards, but it was nice.

The movie was a small indie film called An Education. It's a gem. Jenny, at 16, is as disaffected as I was during my high school years, only she's far more beautiful and poised.

Then we went to PJ Clarke's for dinner. I had a cheese omlette and a bag full of presents. My favorite was a portrait of Sir Paul that my friend picked up at a street fair earlier this year. I'm very happy with it.

The only dark cloud on my birthday horizon is that John's not well. He has a cold and a peristant cough and tires easily, which worries me because he suffers from heart disease. He also is reluctant to get a flu shot, which makes me nuts. I pointed out to him that between his age (55) and his heart trouble, he simply must get the shot. He said he'd "consider" it. I don't believe him, but I have learned over the years that if I pressure him he just tunes me out.
Posted by The Gal Herself at 11/27/2009 10:32:00 PM