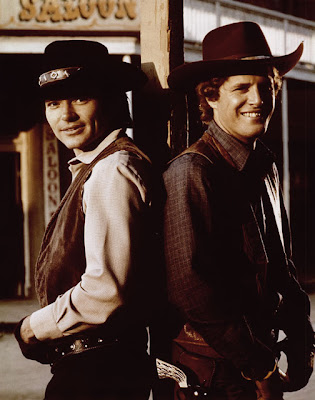 Spinning the dial I came upon a repeat of Alias Smith and Jones, a show I loved during my freshman year in high school. It was a rather unimaginative series, completely derivative of Butch Cassidy and the Sundance Kid. But who cares? Ben Murphy (right) was gorgeous and the late Pete Duel was a dimpled charmer. 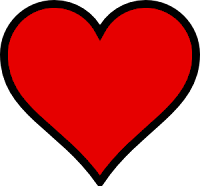 JOEY does not seem to understand that he is (at least) 15 years old, overweight and nearing the end of his life. For while he doesn't play as much as he once did and has trouble jumping onto the bed, he also has become evermore affectionate with me -- I think he enjoyed my cold because I was so still so much and he could press his body into mine and purr -- and ballsier with the other cats. For example, he will nudge Miss Thing out of the way if she's too ambivalent about her treats. That's BIG. For the last decade he has been nothing but subservient to Her Highness.

CHARLOTTE is still her imperious old self. Though Joey's age, she has always been more spry and active. And most particular about her surroundings! For example, one of the cats peed on the bathmat. Once. Months ago. It has been washed several times since then and while the stain is still visible on the underside, the top is perfectly clean and I can smell nothing. That doesn't stop Miss Thing from most theatrically trying to bury the offensive bathmat every time she enters the bathroom. She begs for -- no, make that "strongly suggests receiving" -- treats but if they aren't the Temptations she favors, she waffles before deigning to eat them, or perhaps walking away. And she is not above slugging Joey in the face because the sight of him bothers her. Yet she is my most affectionate major domo. She clearly believes we run this household together and that I would lost with her.

REYNALDO has let me sleep two nights in a row! Nothing more will be said about this because I do not want to jinx it. A diagram of a cat floating around Facebook purports to show where felines prefer to and resist being touched. Reynaldo, being his own man, spins that diagram onto its ear. Rub his tummy, play with his front paws, pull his tail ... any attention is perceived as affection by my Rey-Rey.

I love them very much and they enhance my quality of life and capacity for patience, observation and wonder.

This weekend I have been watching Cspan and The History Channel 2. With the Inauguration, they have been focused on the Presidency. How interesting to have all the Presidents of my lifetime in my living room again!

Watching the Truman-Bush 43 Inaugural Addresses in real time, I was impressed by what real snoozes most of them were. Eisenhower, JFK and Reagan were the only engaging speakers, and only "Ask not ..." was really memorable. All of these men had to have been charismatic on the campaign trail or would not have won election. So I am left to conclude that they were overwhelmed by the enormity of the task at hand and the historic significance of this particular speech and it intimidated them.

Reviewing news and newsreel footage of the Presidencies from the 1930s to 2008, it seems that the two who enjoyed the job most were FDR and Clinton. Johnson and Carter seemed most bereft to leave office.

I wonder how the Obama years will look through the lens of time.