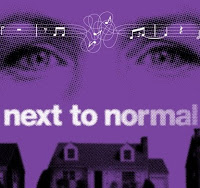 But, fortunately, they don't fail the theater critic at the Chicago Tribune. For I saw this show last night (same performance he did) and enjoyed it far more than one could possibly expect. After all, it is a musical about bi-polar disorder. I want to blog about it, but I'm having a hard time explaining the experience. So I'll just let Chris Jones do it for me.

"Can you keep the cup from tipping?" sing Diana and Dan, the loving but fraught married couple at the center of the emotionally wrenching musical "Next to Normal," "Can you keep your grip from slipping?"

It's just a rhetorical question in a clever song lyric, I suppose, but in modern-day America, a good many of us are not so sure. On some days, at least.

I'd had such a day Wednesday — when overextension comes uneasily close to panic, when the frowns of disappointed colleagues and family members start piling up, when a plethora of inconsequential but time-consuming trees fully obscure whatever woods might be visible this soggy April in Chicago. That could explain why "Next to Normal" hit me so hard Wednesday night, even though it was the second time I've seen the show. There are a lot of superlatives that can justly be applied to this contemporary musical from Tom Kitt and Brian Yorkey, the winners of the 2009 Pulitzer Prize in drama, but surely no other musical has better caught the way we all now try to shove our family time into smaller and smaller boxes, ever more fractured, Blackberry-interrupted segments. Despite our self-assurances that we can have everything, we know that the inevitable consequence is increased isolation in a world where self-sufficiency is completely impossible.

It is concerned with mental illness, but "Next to Normal" is so moving because it paints a picture of a deeply loving suburban family (mother, father, son, teenage daughter), and then proceeds to reveal just had much they fail to help each other. Simple as that, really. Yet it socks you in the gut with the force of recognition.

If it were not for the ending — this was a Broadway musical, after all — you could almost consider "Next to Normal" a kind of communal tragedy. As this quartet — with occasional guest appearances by psychologists — try to figure out the right balance between filling your own needs and taking care of the needs of others (good luck with that), this show certainly sends your mind spinning down a lot of lines of existential questioning: Why is pain distributed so unequally across families? Do you always tell your loved ones the truth, even when it hurts them? Are painful memories always preferable to forgetting? How on earth do you move on from an agonizing loss without wiping its memory from your mind, and therefore wiping away your lost loved one at the same time? How? Huh? Huh?

But on deeper contemplation, I've come to think that my experience Wednesday had a lot more to do with Alice Ripley. Ripley, who won the Tony award for her performance as Diana Goodman, the central character of "Next to Normal," and is starring in this top-drawer first national tour, has now disappeared so far inside her struggling, bi-polar character that it is as if she took one of the walks down the dark staircases that one of her procession of doctors, hypnotists and shrinks suggested, all in an attempt to arrive at some intersection between Diana and normal. It is a wholly different experience from the one on offer in New York, a couple of nights before opening. Ripley and Diana are in a wholly different and far deeper place. There are a variety of opinions, there will always be a variety of opinions, about Ripley's unusual vocal approach to this show. It breaks some of the usual rules. It does not blend. But then "Next to Normal," which is about a family struggling with mental illness in its midst and is largely expressionistic, doesn't work unless Diana is genuinely other and genuinely dangerous. Ripley is other and dangerous, all right. With every note that surges from her mouth. Not to mention confounding, quizzical, needy.

This a towering, gutsy, must-see performance — of the kind that a theater city like Chicago should support and that is rarely found in a modern touring show. But then this is the kind of rare tour that delivers the entire original experience — on balance, even a superior experience to the one on Broadway.

For his touring cast (only Ripley was part of the original Broadway cast), director Michael Greif has found comparably exquisite singers (this gently gorgeous, guitar-soaked score deserves no less) while moving noticeably closer to, well, normal.

On Broadway, I remember watching the glamorous Jennifer Damiano (now Mary Jane in SpiderMan) and thinking that her character's problems would never be so bad. But Emma Hunton, who now plays the daughter Natalie, feels much more like a real teenager for whom life really could go either way. Asa Somers, who plays husband Dan, is every inch the standard suburban dad, well-meaning and fundamentally decent, but ill-equipped in so many ways, as many of us are. Curt Hansen also creates a more normal Gabe, if anything about his presence could be said to be normal. Preston Sadleir is guilelessly charming as Natalie's well-meaning boyfriend, Henry. And Jeremy Kushnier — once the star of "Footloose," now a dignified shrink — brings a new emotional force to a doctor doing his best but using only that to which he has access, which may not be any good at all.

Not for Diana, not for any of us for whom normal is both a pejorative and an aspiration.