What's your favorite wardrobe item and why? My darkest blue blue jeans because I can dress 'em up or dress 'em down. They go with EVERYTHING.

I think the planet could use an anger management seminar

I was born with a very bad temper. My mother loves to the tell story of a little pre-school Gal who was sentenced to solitary confinement in my bedroom. After a while, when her anger had subsided, Mom came to speak with me calmly and, perhaps, release me from captivity. She couldn't open my bedroom door. I had spent the entire time dragging my mattress, which was bigger than I was, across the room to block the entrance. As mad as she'd been at me, I was (pound for pound) madder at her.

This temper of mine is exhausting and, more often than not, makes bad situations worse. So I work very hard at keeping it under check. I am not always successful, and for that I'm sorry, but I do genuinely try so hard.

Lately I wonder if others, similarly afflicted, try at all.

1) My downstairs neighbor, a peculiar older man who regularly wears shorts and dark glasses, regardless of the weather or where he is, steals sections of my newspaper every morning. Today I caught him. He denied it and started yelling at me about how sick he was of me "constantly" accusing him (he had part of my paper in his leather folder as we spoke). This wasn't "a good offense is the best defense" kinda thing. This was a "spinning out of control" kinda thing. It concerned me, as he's been known to key the cars of people who cross him. I don't have a car, which should make me more brazen, but he's so odd and crazy and mad that I really don't want to deal with him anymore. I reported him to the condo association and invite them to handle it.

2) I went up the stairs to use the restroom at a friend's house recently and could not help noticing something disturbing. The middle bedroom, the one you see first when you reach the top of the staircase, has no door. Her 19-year-old son has taken his temper out on it so many times that it can no longer be repaired, so she replaced it with a sheet on a suspension rod.

3) Yesterday, on the busy street that borders my village, I saw and heard a driver leaning on his horn, really blasting it. He wanted to make one of those coveted right turns on red, and the driver in front of him was waiting for pedestrians to cross. What did Mr. Noisy Pants want the car ahead of him to do, run people over?

I'm not unsympathetic. It really doesn't take a lot to trigger my temper, and it does take work to reign it in. But I do work at it, and these people make me ask (to borrow from Sir Paul): All the angry people, where do they all come from?
Posted by The Gal Herself at 2/02/2009 01:38:00 PM 3 comments: Links to this post 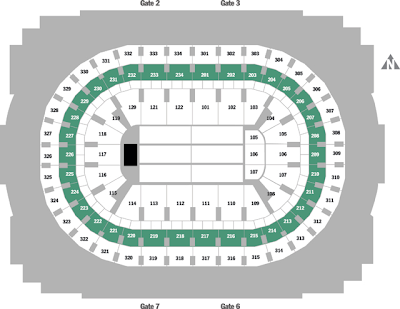 I know I'm probably in the minority on this, but I loooove using Ticketmaster. For Bruce Springsteen tickets went on sale this morning at 10:00, and by 10:07 I had my seat assignment (Section 103, Row 10).

I love Bruce. Always have, always will. But pointing and clicking is so much easier than waiting in line at the box office or hitting redial over and over again. I'm old, I'm tired. I like easy.

Besides, paying just $19.50 in shipping/handling for a face-value ticket that gets me on the lower level for THE BOSS is a bargain.

Yes, I am now entering the fourth month of worrying about my job security. Of course, it's stressful to come in every day just to feel the axe on the back of my neck. Alright, I am suffering from a vague dissatisfaction/disappointment with my entire life. Sure, it's probably not healthy that the fictional heroine I've related to the most lately is Kate Winslet/April Wheeler from Revolutionary Road. But you know what? So what! Soon it's gonna be Boss Time in Chicago and I'll be there.

Isn't the world a beautiful place this morning?