3) Where are you from? Are you living there right now? I have lived my entire life in the Chicagoland area. Where I live now is about 40 miles from the hospital where I was born.

6) What are you wearing? An oversized t-shirt emblazoned with a photo of Robert the Doll, my favorite demonic talisman, and support hose to prevent clotting (see post below). Yes, it's a good thing you aren't here because I'm sure I'm damn near irresistible right now.

7) What was the last thing you listened to? Something from my Dusty Springfield playlist. I'm seriously into Dusty these days.

8) What was the last thing you ate? A tossed green salad topped with slivered almonds, raisins and French dressing. I made it myself!

9) What was the last thing you watched on TV? George Clooney's exceptional Good Night and Good Luck is on right now.

10) What's your favorite tv show? Why? NCIS. Because Gibbs is my TV Boyfriend. If you see Mark Harmon, please tell him I love him.

11) Quick! Find a book, or something with text on it! Flip to a random page and post the second paragraph's first sentence. "Throughout the romantic whirlwind, Carly continued to write songs -- not just 'Anticipation' about Cat Stevens but 'Three Days' about Kris." From Girls Like Us by Sheila Weller.

12) What was the last movie you saw? How was it? I believe it was Shutter Island. Leo was very good, but I'm disappointed that I was able to figure out the surprise ending long before we got there. That took a lot of the fun out of it.

This is not the bad part 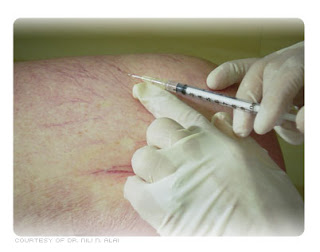 This is a photo of the sclerotherapy treatment I had on my veins today. About 15 injections on each leg over 30 minutes. Each site is covered with gauze and tape, which makes it appear as though I have suddenly spouted goiters. While unpleasant, this is not the worst part of the treatment.

1. When was the last time that you felt your world got turned up

side down? In a good way, my world was completely rocked on 11/4/08, when I found myself part of an enormous, peaceful, joyful celebration in Chicago's Grant Park when Barack Obama gave his victory speech. For all that it amuses some to mock the President's "hopey-changey thing," the spirit in the park was empowering, transformational and real. YES, WE DID!

2. Should the United States do more to help its own citizens before helping people in other countries? Let me rephrase that to "as we help people in other countries." I've posted about this before. I am stricken and saddened by the dichotomy here -- we generously opened our hearts and wallets to Haitians but there was no similar outpouring to those who suffered through the Nashville floods. Often I hear the homeless on our own streets described as "lazy," when in fact I think a majority are ill. So I wish we would extend the same compassion to our own that we show those overseas.

4. With what types of people do you tend to associate? I am fortunate in that I don't think there's a single, simple answer to that question. My friends are a very diverse group, and my life is much richer for it.

5. Besides blogging what is the last creative thing that you've done? Since I'm a writer by trade, the people who pay me like to think I do something creative every workday.

6. In nature, what outdoor activities do you enjoy the most? Walking, preferably alone. I notice more when I'm by myself.

7. When was the last time that you had a great belly laugh? This past week a coworker showed me a photo of a State Farm agent who gave her customers piggy banks. It really had nothing to do with the woman in the photo -- it was the piggy banks and it's part of a long in joke and you really had to be there. But the important thing to note is that it made me laugh so hard I had to catch my breath.

8. What kind of fashion-sense attracts you? Clean lines. When I was a very little girl, the icons were JBKO and Grace Kelly and I think that's why I'm drawn to that "style of simplicity."

9. What traits in others turn you off? Space hogs. It's so selfish! Taking up space on the locker room bench with your iPod and water bottle so others can't sit; puffing away right in front of the building entrance, ignoring what the signs say, so I have to fill my lungs with fresh air and run through your smoke, just to get to my office; giving your backpack its own seat on the train; scolding your kid via your cell phone and in my ear ... You know, acting as though it's your world and we just live in it.
Posted by The Gal Herself at 5/22/2010 07:39:00 AM 2 comments: