1. Tell us about the last time that you got hurt in the arena of love. I was seeing a younger guy who, I thought, was desperately in love with me. When our relationship inevitably ended, I missed the genuinely imaginative sex, and the feeling that I had rocked his world. That's why I was as hurt by his quick recovery -- within weeks he started dating the woman he would soon marry and have a son with -- as I was by our break up. To be honest, I missed the fantasy of seeing myself as the center of his world as much I missed him.

2. Have you ever been part of the wedding party, other than your own? Yes. I'm very familiar with bridesmaid duties.

3. Let's say you find yourself in Hell after you die. Think about everyone you've known in your life. Who would be the one person that would least likely to surprise you by being in Hell with you? I have an ex who was, without a doubt, the worst thing to ever happen to me. I'm sad to report I'm not the only woman who can make that claim about him. Plus, he believes in Hell (I don't), so he's the most likely candidate.

4. What brings you good luck? I believe my Hollywood snowglobe is good luck. Or at least it helps me send my mind to the happy place.

5. Do you have a photo blog? If so, feel free to share the link with us! Nope. Sorry, no photo blog.

6. What is your biggest source of news? (Internet? Newspaper? Television? Radio? The Daily Show? Other?) TV. If I hear about a story that interests me, I follow it online and in print.

7. What's the hottest you've ever been in your life? By "hot," do you mean like sexy? Then I'd have to say it was a New Year's Eve back in my thin days, when I was wearing a little gold tank under a tuxedo jacket. Of course, that was many years and several dress sizes ago.

8. If you had to choose a theme song for your blog, which would would you choose and why? Well, I do like to think I'm gonna make it after all.

9. Who was the last person you had an online conversation with that you've never met or talked to on your phone? The Cub fan on Twitter who agreed that Fox sportscaster Joe Buck is a waste of space.
Posted by The Gal Herself at 7/16/2010 10:28:00 PM 4 comments:

Have I made myself clear?

It was 94º today when I left work early to get a pedicure at a high-end Oak Street salon ... at a discount! Normally such an event would delight me. Out of the office at 1:00, an excuse to go to the toniest/trendiest part of town, and a luxury pedicure for just $16 (including tip!).

A cool thng to do on a hot day 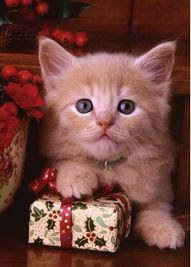 I just ordered my American Humane Christmas cards. A good reminder that it will be cold enough, soon enough. If you want to do a good deed, to help kids and cats and dogs as you spread holiday cheer, click here.
Posted by The Gal Herself at 7/16/2010 05:04:00 PM No comments: