Day 4. No excuses. At least, no legitimate ones. I not only stayed well within my calorie limit today, I took care of my major weekend chores -- laundry and grocery shopping. I checked the local health club's weekend hours and they are open until 6 Saturday and Sunday and until 3 on Monday. So my goal is to get over there three times over the next days. Wish me luck!
Posted by The Gal Herself at 9/04/2009 09:55:00 PM 1 comment:

There may be celebrities that I enjoy mocking more than Jerry Lewis, but none that I have enjoyed making fun of as long. Jerry Lewis is corny, vulgar, maudlin, nasty and often just plain nuts. His massive ego and complete lack of self control make the Telethon one of my favorite TV events of the year.

The sublime ridiculousness that is Jerry Lewis' stage persona doesn't take away from the wonderful work he has done for MDA, and that MDA does to help those neuromuscular disease. Now in his 80s, after winning humanitarian awards and raising over $1 billion for MDA, he certainly doesn't have to put his snarky old self out there for the amusement of smart asses like me.

That's why I already donated $70 to MDA, before the show starts. I want to make sure I do my part to help the charity that has done so much good for so many over the years. Then I can just sit back and enjoy Jer's dopey hijinks in peace.

If you're going to watch the telethon, eager to see how many minutes into the show it takes Jerry to insult someone, I suggest you do the same.

Even if you're not going to watch it, consider making a contribution. They really do help the people who need them. Here's their website.
Posted by The Gal Herself at 9/04/2009 07:56:00 PM 1 comment: 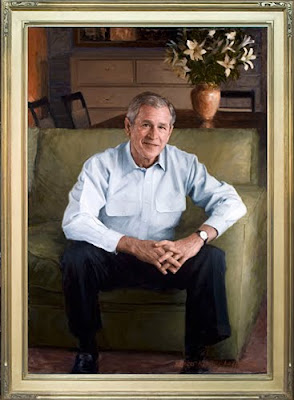 This is the 43rd President, George W. Bush. Take a look at his face in this, his commissioned White House portrait. Does he look evil to you? An enemy of the very Constitution he was elected* to defend and protect?

Most of all, does he look like a man out to indoctrinate your children and twist their impressionable minds to follow his radical right wing agenda?

After all, in 2001 he addressed children directly, asking them to send at least $1 to help children in Afghanistan. The funds were going to be distributed in conjunction with (get this!) the United Nations!

I know, I know. You're shocked. What a bastard!

Aside from the hypocrisy of those who freak out over Obama's speech but not Bush's, there is another element of this that bothers me ...

When are the vocal minorities who protest Obama's speech going to accept it -- this man IS the President?* What is to be gained by encouraging schoolchildren NOT to listen to him? I mean, there are parents actually threatening to keep their children home rather than have them exposed to Barack Obama!

I live in a neighborhood where kids proudly wear Obama t-shirts as they skateboard around, so I find all this rather shocking and confusing. I had no idea how vitriolic this has become in other parts of the country.

In case I need a career change