The self-serving comparisons can end now 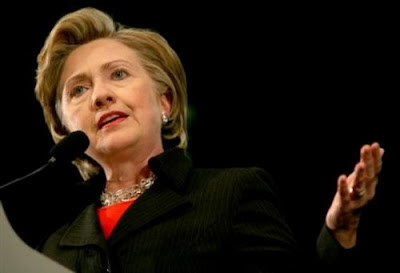 Fans of Gov. Palin's like to liken her to Sec. of State Hillary Clinton, eager to seduce Clinton loyalists to the right with the assumption, I guess, that any woman running for office is the same as any other.

Forget how different their points of view are on everything from a woman's right to choose to the role of government and the value of diplomacy. Ignore the differences in their educations and resumes. Just concentrate on how they handle controversy.

Hillary Clinton doesn't complain about Amy Poehler's impersonation of her on SNL.

• She is paranoid and keeps an "enemies list," a la Richard Nixon's

• Hillary Clinton had an ongoing affair with White House Counsel Vince Foster, and his inability to protect the then-First Lady from legal problems drove him to suicide

• Hillary Clinton had a brief affair with Vince Foster years earlier, when they were both partners at the Rose Law Firm, and she had him murdered to keep him silent

I'm tired. I realize I have only scratched the surface,
but this is so tawdry I can't go on.
Yet somehow, Hillary Rodham Clinton has managed to survive the "superficial, wasteful political bloodsport" Governor Palin is now fleeing.

I didn't support Hillary Clinton in the primaries but admire the way she has conducted herself since Denver last year.

I find little about Governor Sarah Palin to admire. (OK, I think it's great the way Palin insists on keeping her glasses and not opting for contacts or Lasik.)
Posted by The Gal Herself at 7/04/2009 09:55:00 PM 3 comments: Links to this post 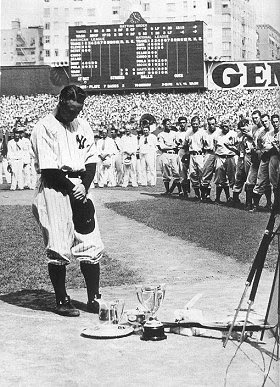 It was 70 years ago today that Lou Gehrig moved from being a Yankee hero to being a Great American Hero. Crippled by disease, his stellar career cut cruelly short, he displayed heartbreaking grace and courage as he said goodbye to public life at the age of 36.

"Fans, for the past two weeks you have been reading about the bad break I got. Yet today I consider myself the luckiest man on the face of this earth. I have been in ballparks for seventeen years and have never received anything but kindness and encouragement from you fans.

"So I close in saying that I may have had a tough break, but I have an awful lot to live for."

He was dead two years later.

For more than 50 years, Lou Gehrig held the record for homeruns by a first baseman.* Before he became ill, he had played in 2,130 consecutive games, earning him the name "The Iron Horse." To show how insidious ALS is, during those 2,130 games he suffered more than a dozen fractures in hands. Broken bones couldn't stop him, but ALS did. Still, he felt he had "an awful lot to live for."

Lou Gehrig was the first major league ballplayer to ever have his jersey (Yankees #4) retired. It's easy to argue that no one has ever deserved it more.

70 years later, ALS is still incurable, still costing citizens their lives. Today, as we celebrate what's best about America, I don't think it would be inappropriate to honor Lou Gehrig with a contribution to The ALS Association. Because with courage, talent, sportsmanship and grace, Lou Gehrig personified the best of us. Reread his words, and I'm sure you'll agree. (Don't assume that you can't afford to really make a difference; in this rough economy, charities have been hit hard and any donation is most welcome.)