The Now Vs. Then Meme

6. I spent way too much time: in front of the TV

7. I spent not enough time: thinking about money

9. Biggest concern: I don't recall, but knowing me I'll bet it was something to do with Colin

10. What my biggest concern should have been: Money

12. Dumbest thing I did that year: Went to Key West for my birthday instead of New Year's because I was worried about flying aroud the time of the millennium (remember Y2K?)

13. If I could go back now and talk to myself I would say: "You're right about Colin. He's sweet and fun, but this relationship won't really be of much consequence."

3. Occupation: Associate Creative Director (but at a different agency)

6. I spend way too much time: on the computer

10. What my biggest concern should be: Money

2. What do I miss least from 1999: That little apartment. It was a vintage building with temperamental wiring and if I kept the ac on for too long I'd blow a fuse.

3. What have I accomplished in 10 years that I am most proud of: Bought this condo

Saturday. Cardio. I feel good. Because I didn't have many Saturday errands to run, I was able to spend as much time as I wanted on the bike and the elliptical and I pushed myself a bit.

Yes, I read this week's Time cover story ("Why Exercise Won't Make You Thin"). I'm willing to entertain that much of that article is true. But note I didn't say I felt "thin." I feel good. I'm confident that if I concentrate on being healthier, the weight loss will follow. As for now, it's nice to know I did something healthy for my heart, lungs, and bone density. It gives me a sense of accomplishment and well-being (and that zen feeling may come in handy during tonight's Cub game -- see post below.)
Posted by The Gal Herself at 8/08/2009 07:15:00 PM 2 comments: Links to this post

Yeah, it's pretty. So what? 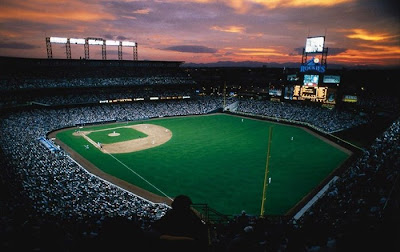 This is Coors Field in Denver. Spooky things happen to my Cubs when they play here. Not bad, necessarily, but always unexpected. I suspect it's cursed. Upping tonight's weirdness quotient is Jason Marquis, a former Cub, taking the mound against my Boys in Blue.
Posted by The Gal Herself at 8/08/2009 07:06:00 PM 1 comment: Links to this post

The local food pantry is open from 9 til noon on Saturdays. Whenever I accumulate a bag of nonperishables -- it usually takes about a month -- I walk it over there.

There were more people there this morning than last month. In fact, there were more waiting than I remember ever seeing. Volunteers were passing out plastic numbers to those who were waiting. They were already past #60 and it wasn't even 9:30 yet!

I donated tuna, spaghettios, pork and beans and cookies, as well as toilet paper and toothpaste. Everything I purchased was on sale and I didn't spend more than $1 for any individual item, so picking these things up didn't really have much of an impact on my budget. I encourage you to do the same. The ongoing Recession makes it more important than ever for us to stand by our neighbors.

I discovered this food pantry because my church supports it. If you don't know where your neighborhood food pantry is, your can refer to the locator at Feeding America.
Posted by The Gal Herself at 8/08/2009 06:25:00 PM 1 comment: Links to this post 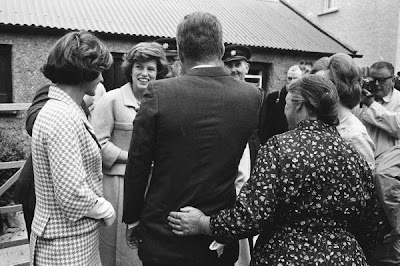 According to CNN.com, she's in "critical but stable condition." Her family is by her side.

I can't get over the fact that she's 88! Since she and JFK were close, she appears prominently in many biographies of him, and so in my mind she's kind of frozen in her 40s. This is how I think of her, in 1963, when she accompanied her brother, President Kennedy, to Ireland. Eunice is visible over the President's shoulder. (The woman in the print dress with her back to the camera is a proud Kennedy cousin who lived in Ireland. President Kennedy promised the crowds in Ireland that he would return in Spring. Sadly he didn't live to do that.)

Mrs. Shriver's also the founder and remains the chairwoman of The Special Olympics, "which helps 3 million people with intellectual disabilities in nearly 200 countries around the world." And she's Arnold Schwarzenegger's mother-in-law -- which, I imagine, is a job in itself.

2. Tell us about one strange event in your life this week. I received an email from the human resources department titled, "Is it safe to open an email from HR?" When I clicked on it, my MacBook crashed. REALLY crashed. It's been sent to Apple and I'm on a loaner until Thursday.

4. Tell us about your best friend. He's a foodie. He loves wristwatches the way I love handbags. He puts a lot of care and concern into doing right by his family. He's related to John Adams (and, therefore, John Quincy Adams). He's really not that into sports. He thinks I'm neat.

5. What was the best vacation that you ever had? I really enjoyed spring in Boston. The Common and Public Garden were fresh and green and folks were enjoying being out with their kids and dogs. I also enjoyed the Kennedy Library.

6. What was the last big purchase you made? Joining the Formula Fitness Club here in town.

7. What is your favorite non-alcoholic drink and when did you start drinking it? Classic Coke. I can't remember not drinking it.

8. When was the last time someone did not believe you? I can't think of anything ...

9. You have signed on to direct a romantic comedy. Who are your stars? Diane Keaton and Richard Gere. This time their pairing would be healthier and more light-hearted than the first time we saw them together ...
Posted by The Gal Herself at 8/08/2009 07:25:00 AM 4 comments: Links to this post