1. Are you the type of person who jumps into new ventures or do you prefer baby steps? Both. I think of it like bowling: It's baby steps until my toes touch the line, and then I'm all in.

2. Who do you feel believes in you the most? The answer depends on whether the situation is personal or professional.

3. When was the last time you were on a stage? Junior high school.

4. Tell us about the worst boss you ever had. It's a toss up. The first insisted every one of her office supplies (right down to post-it notes and paperclips) be pink and told me that she believed we reacted strongly to one another because because we were adversaries in a past life and if we didn't resolve it this time around we were destined to clash for all eternity. The second one did no work whatsoever and actually slept through client meetings ... in front of the client.

5. If the NCAA Men's or Women's Final Four basketball tournament was played in your hometown arena or within easy driving distance from where you live, would you try to attend one of the three games? No. I'm sorry because it sounds almost unAmerican, but I don't give a crap about the NCAA.

6. Of all the clothes you own, what do you feel most comfortable wearing, and why? Jeans. Because they're jeans. 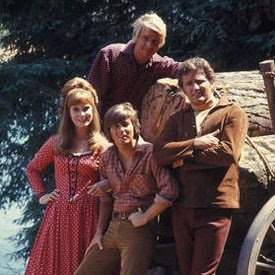 7. On what television show—either past or present—would you like to make to make a guest appearance, and what role would you play? Here Come the Brides. I'd like to be one of the lasses from New Bedford who travels to Bridal Veil Mountain.

8. St. Patrick's Day is on Wednesday March 17th. Do you celebrate and wear green? Drink Green Beer? Ignore it? I will wear green and will most likely toast the day with an alcoholic beverage.

9. If a leprechaun told you that you could have any amount of money from his pot of gold but it had to be a specified amount for a specified item, how much would you ask for and what would it be for? $2,191. That would pay for a trip to Key West over New Year's, staying in a hotel right there on Duval. Please let the leprechaun know it will only cost more the closer we get to the holidays, so we should act now.
Posted by The Gal Herself at 3/12/2010 11:19:00 PM 2 comments:

My favorite sale of the year

The Carson's* Goodwill Sale! Every item of clothing or textiles (I think this means towels, throw rugs, etc.) you bring to Carson's gets you a coupon for 20% that's good until 3/24. That's all there is to it. Really, it's that simple.

Almost everything in the store is included in the Goodwill Sale -- EVEN COSMETICS!!!!! Which means I can replenish my supply of Clinique Eye Repairwear.

So I get to save, and I get to help Goodwill, which is one of my favorite charities.

Today I participated in a Michigan Avenue event to publicize the sale. A Goodwill truck was parked at Michigan and Illinois and I dropped off three blouses. In return the PR representative peeled off multiple coupons. I whispered that she'd handed me waaaay more than the 3 I deserved in exchange for my 3 blouses, but she told me to "enjoy them." And so I shall!