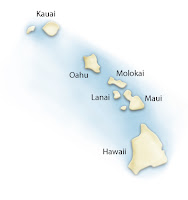 My best friend takes off tomorrow for Hawaii. He and his wife and celebrating their 20th wedding anniversary in Maui, where they spent their honeymoon.

This is a big deal because it's hard to keep a family together in this day and age, and they have achieved it. Even more, it's a big deal because this trip came together very quickly. Originally -- and until last Wednesday -- they were celebrating in Puerto Vallerta. When the government officially advised against travel to Mexico, they scrambled to develop Plan B (and I let out a huge sigh of relief because he's diabetic and at higher risk for influenza).

I am glad they are pleased with their plans. I hope they have a wonderful and romantic time. But selfishly I will miss him enormously when he's incommunicado.
Posted by The Gal Herself at 5/03/2009 08:42:00 PM 3 comments: 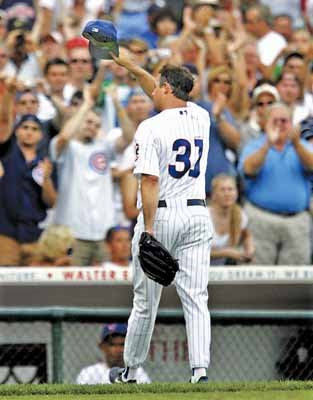 Today, the Cubs are retiring the number of my personal favorite Cub of all time -- The Professor, Mad Dog himself, Greg Maddux. He shares the honor will another fabulous Cub great, Ferguson Jenkins. They both wore 31 on their backs, and were #1 with the fans in the bleachers. They both celebrated their 3000th strike outs as Cub pitchers. I was there on that rainy night to see my beloved future Hall of Famer get his.

I admire and appreciate Fergie. I grew up on him.

I LOOOOOVE Greg Maddux. He came to the Cubs as a pup, a draft pick, a rookie, and grew to be one of the best fielding pitchers ever. (And the 8th winningest pitcher in the history of the game.) He had that little 11-year interlude with the Braves (they are retiring his jersey in July), but he came back to us. It's indicative of how frequently the Cubs break our hearts that we let him get away twice.

This has been the first season in decades that I haven't been following his career. I miss him so much. I'm glad his number will be flying forever above The Friendly Confines, along with Sandberg's (my grandma's favorite Cub of all time), Sweet Swingin' Billy Williams', Mr. Cub Ernie Banks', and Ron Santo's. Oh yeah, and Fergie, too. I'm honored to have seen them all play. They're all my guys and treasure them all.

I just love Greg Maddux most of all. He's grayer and a bit heavier than last time he stood on Wrigley Field, but damn I'm happy to see him. Welcome home.
Posted by The Gal Herself at 5/03/2009 12:26:00 PM No comments:


First Job: Babysitting while I was in high school

First Favorite Politician: Walter Mondale. His was the first Presidential campaign I've ever worked on.

First Record/CD: Love Me Do/PS I Love You by the Beatles

First Brush With Death: My next door neighbor died when I was in grade school and my parents brought me to his wake

First House/Condo Owned: This one. Before this, I rented.

First Meme You Answered on Your Blog: Thursday Thirteen