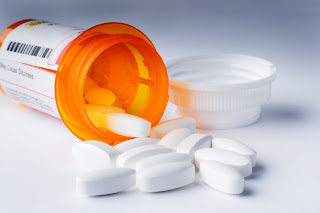 I'm in a strange mood. Work was stressful today, but then again, I'm in advertising, so stressful should be the norm. I was short-tempered with my coworkers because we were making a rather simple assignment needlessly complicated. Had a decent workout at lunch, but that didn't improve my mood.

I watched American Idol, but it wasn't as exciting as I wanted it to be. Tuned into the Cubs vs. Cards -- one of baseball's great rivalries -- but I can't lose myself in it. 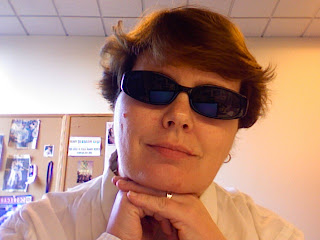 This is how it really looks, after a day at the office and a trip to the health club, where it responded in its own way to your basic locker room humidity. Of course I'd prefer it if my layers didn't turn into cowlicks or wings, but hey, such is life. I like it still.

Why the sunglasses? Because as soon as I post this, I'm logging off and going home! It's been a crazy day and I can't wait to get home to my Cubs and the American Idol finale! 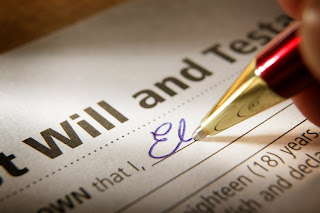 So I went to dinner with my mother, my lunatic older sister and her new husband, who looks so eerily like our dad that I wanted to page a Freudian shrink right there on the spot.

Now you would think that the reason my older sister came in would be to check on our mother, who has been ill. And, to be charitable, I'm willing to credit that as part of the reason. Then there's the facade she's trying to maintain for her new husband's benefit -- the fantasy of being the hub that holds our family together, even though none of us likes her that much. Ok, whatever.

But the BIG reason for the trip was to ask me, face to face, in front of her husband and our mother and God and everybody, whether I would be willing to administer her children's inheritance should she and new hubby die at the same time. She apparently has a very large life insurance policy and doesn't want her kids to touch that money until they each reach the age of 32. (They are 21 and 19 respectively.)

She and her new husband are worried that, if they died together, his kids would try to take her kids' money and vice versa. She believes that his brother and I are the logical choices to watch over all this, especially because she knows I'd "fight" if anyone tried to take anything that belonged to her children.

Well, yes, I would. I hate bullies and have a highly evolved sense of fair play. But I wouldn't fight for her kids anymore than I would for anyone else's. I don't like her and I barely know them.

But since I responded in the affirmative, it made my older sister happy and my mother appeared proud that we were playing nicely. Plus Sis and The Hubs bought me dinner (I had jumbo shrimp). So I guess in all it was a successful, albeit weird, evening.
Posted by The Gal Herself at 5/19/2009 02:59:00 PM 3 comments: Links to this post